Sales climbed around 49% year over year to $14,506 million in the quarter. The figure, however, missed the Zacks Consensus Estimate of $15,359.8 million. The company benefited from higher selling prices and strong Retail performance in the quarter.

Potash division’s sales surged 227% year over year to $2,668 million driven by higher net realized selling prices. Sales volumes in the segment were driven by strong demand in offshore markets. Volumes in North America were impacted by delayed planting and a compressed application window. Selling prices increased on the back of tight supply.

Sales in the Nitrogen segment were $1,880 million, up around 91% year over year. The upside can be attributed to higher net realized selling prices, which offset lower volumes. Sales volume fell due to plant outages impacting ammonia and urea production as well as cool and wet spring in North America. The company witnessed higher natural gas costs in the quarter.

Sales in the Phosphate segment were $514 million, up 46% year over year on the back of higher net realized selling price. Prices rose in sync with an increase in global benchmark prices. Volumes declined in the quarter, impacted by the cool and wet spring in North America.

Cash provided by operating activities was $2,558 million for the reported quarter, up around 30% year over year.

The company repurchased around 22 million shares year-to-date as of Aug 2, 2022, for a total of roughly $1.8 billion.

Nutrien’s shares have gained 38.9% in the past year compared with 49% rise of the industry. 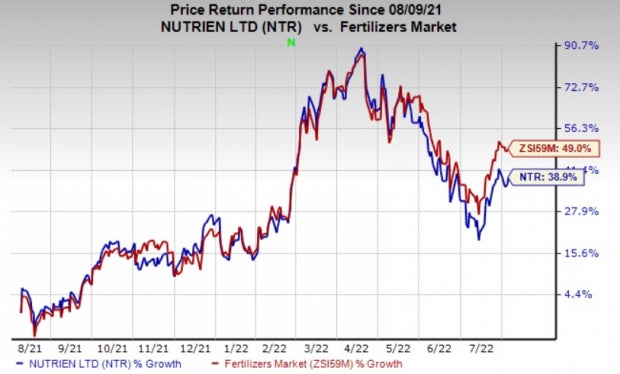 Cabot’s earnings beat the Zacks Consensus Estimate in each of the trailing four quarters, the average being 16.2%. CBT has gained around 34% over a year.

Sociedad’s earnings beat the Zacks Consensus Estimate in two of the trailing four quarters, the average being 28.2%. SQM has gained roughly 82% in a year. The company sports a Zacks Rank #1.

Albemarle’s earnings beat the Zacks Consensus Estimate in each of the last four quarters. It has a trailing four-quarter earnings surprise of roughly 24.2%, on average. ALB has gained around 3% in a year and currently carries a Zacks Rank #2.