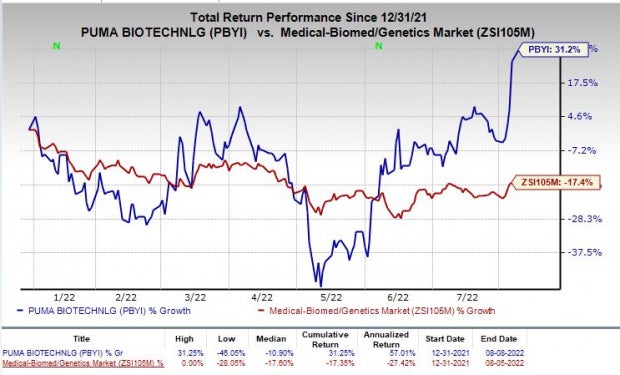 In the second quarter, total revenues were $59.5 million, beating the Zacks Consensus Estimate of $53 million. Revenues were up 11.4% year over year, driven by the worldwide commercial revenues and royalties from Nerlynx

Product revenues from Nerlynx were $51.3 million in the second quarter, up 4.9% year over year and 26% sequentially due to inventory built at specialty pharmacies/distributors. Nerlynx’s product revenues were much better than management’s guidance of $44 million - $47 million.

For 2022, Puma Biotech maintained Nerlynx’s net sales guidance range of $180-$190 million. However, the company lowered its royalty revenues and now expects the same to be in the  $27-$30 million range, down from the previous guidance of $27-$34 million. The guidance for royalty revenues was lowered due to the delayed delivery of Nerlynx shipment to Puma’s Chinese partners and a potentially negative foreign exchange impact.

A key analysis of Nerlynx is the phase II SUMMIT basket study for treating solid tumors in patients with activating EGFR, HER2 or HER4 mutated cancers.

In June, the company reported top-line data from the phase II SUMMIT trial, evaluating the efficacy of combined neratinib, fulvestrant, and trastuzumab in patients with hormone receptor positive, HER2-negative, HER2-mutant metastatic breast cancer. Puma reported final results from the biliary tract cohort of the phase II SUMMIT ‘basket’ trial in June. The. The company now intends to hold a pre-NDA meeting with the FDA to discuss the potential for an accelerated approval pathway for these two indications in the second half.

The company plans to report data from another cohort of the SUMMIT study in second-half 2022, evaluating Nerlynx in non-small cell lung cancer patients with EGFR exon 18 mutations and hold a pre-NDA meeting with the FDA to discuss the potential for an accelerated approval pathway for this indication by the end of 2022.

Meanwhile, Puma Biotech plans to release results from some cohorts of the phase II TBCRC-022 study on Nerlynx in combination with Roche’s Kadcyla in patients with HER2-positive breast cancer with brain metastases who have previously been treated with Kadcyla in second-half 2022.

Some better-ranked stocks in the same sector are Novavax (NVAX - Free Report) and Sesen Bio (SESN - Free Report) , each carrying a Zacks Rank #2 (Buy). You can see the complete list of today’s Zacks #1 Rank stocks here.

Novavax’s earnings estimates for 2022 have remained steady at $27.23 over the past 30 days. Shares of NVAX have declined 20.8% year to date. Earnings of Novavax missed estimates in all of the last four quarters. NVAX delivered a negative earnings surprise of 184.49%, on average.

Sesen Bio’s loss estimates for 2022 have remained steady at 44 cents per share over the past 30 days. Shares of SESN have declined 20.9% year to date. Earnings of Sesen Bio beat estimates in three of the last four quarters and missed the mark on one occasion. SESN delivered an earnings surprise of 69.94%, on average.