Barring one-time items, the adjusted earnings were $1.98 per share, down from $3.98 a year ago. The figure topped the Zacks Consensus Estimate of $1.70.

Net sales fell around 26% year over year to $1,186.1 million and missed the consensus mark of $1,199.8 million. The company witnessed lower sales across its major segments in the quarter. It saw lower-than-expected sales in the U.S. Consumer segment and sustained pressure on sales in the Hawthorne unit due to oversupply issues in the cannabis industry.

Company-wide gross margin rate (as adjusted) was 25.5% compared with 30.8% in the year-ago quarter. The decline in gross margin is attributable to unfavorable fixed cost leverage related to volume, increased commodity costs and unfavorable distribution costs. These were partly offset by price increases and favorable segment mix.

The company anticipates a similar or greater decline in sales in the U.S. Consumer division in the fiscal fourth quarter. For the full year, it now expects sales to decline 8-9%. It also expects full-year adjusted earnings per share to be $4.00-$4.20.

Shares of Scotts Miracle-Gro have declined 49.2% in the past year against a 48.7% rise of the industry. 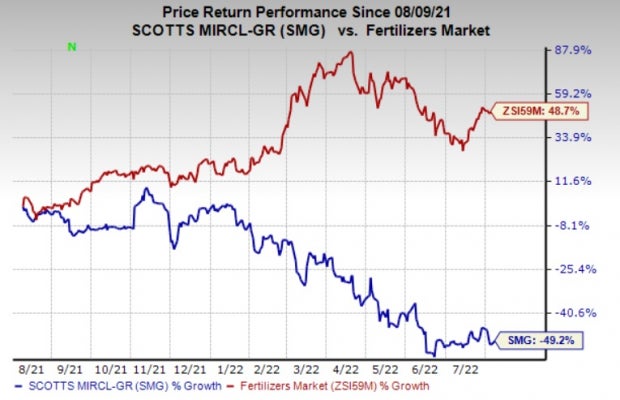 Sociedad’s earnings beat the Zacks Consensus Estimate in two of the trailing four quarters, the average being 28.2%. SQM has rallied roughly 88% in a year. The company sports a Zacks Rank #1.

Albemarle’s earnings beat the Zacks Consensus Estimate in each of the last four quarters. It has a trailing four-quarter earnings surprise of roughly 24.2%, on average. ALB has gained around 6% in a year and currently carries a Zacks Rank #1.

Is VAALCO (EGY) Poised for a Robust Q2 Earnings Performance?