Kronos Worldwide, Inc. (KRO - Free Report) logged profits of $45.9 million or 40 cents per share in second-quarter 2022, up from $25.7 million or 22 cents in the year-ago quarter. The figure missed the Zacks Consensus Estimate of 51 cents.

TiO2 segment profit increased around 46% year over year to $69.5 million in the reported quarter. The upside was driven by a rise in average TiO2 selling prices, which were partly offset by increased production costs, including higher costs for raw materials and energy.

Kronos Worldwide ended the quarter with cash and cash equivalents of $371.2 million, up roughly 2% year over year. Long-term debt was $415.8 million, a roughly 12% year-over-year decline.

Kronos expects the long-term outlook for its industry to remain positive. It will continue to monitor current and expected near-term customer demand levels and will align its production and inventories accordingly.

The company saw higher feedstock costs on a year-over-year basis in the first six months of 2022, and expects its feedstock costs to continue to rise moderately for the balance of 2022. High energy costs and availability concerns have contributed to further cost increases and the company expects the disruptions to global markets to continue for the foreseeable future. These disruptions and other global events could also lead to weaker demand for TiO2 in the second half of 2022, the company noted.

Shares of Kronos have gained 16.2% in the past year compared with a 9.8% fall of the industry. 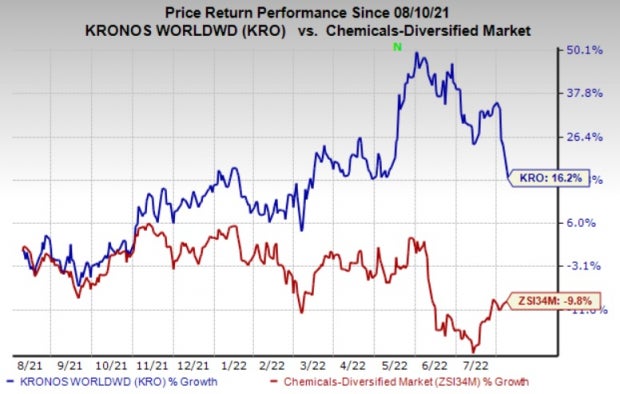 Sociedad’s earnings beat the Zacks Consensus Estimate in two of the trailing four quarters, the average being 28.2%. SQM has rallied roughly 91% in a year. The company sports a Zacks Rank #1 (Strong Buy). You can see the complete list of today’s Zacks #1 Rank stocks here.

Albemarle’s earnings beat the Zacks Consensus Estimate in each of the last four quarters. It has a trailing four-quarter earnings surprise of roughly 24.2%, on average. ALB has gained around 2% in a year and currently carries a Zacks Rank #1.

Daqo New Energy, currently carrying a Zacks Rank #1, has an expected earnings growth rate of 160.8% for the current year. The Zacks Consensus Estimate for DQ's earnings for the current fiscal has been revised 13.5% upward in the past 60 days.

Daqo New Energy’s earnings beat the Zacks Consensus Estimate in three of the trailing four quarters, the average being 10.8%. DQ has gained around 15% over a year.