Endeavour Silver Corporation (EXK - Free Report) reported a loss per share of 2 cents for second-quarter 2022. The Zacks Consensus Estimate was of earnings of 1 cent. EXK had recorded earnings of a penny per share in the year-ago quarter. Due to the decline in silver prices during the quarter, EXK had decided to withhold a certain amount of silver sales, which affected its top and bottom line, and cash flow.  EXK is currently holding around 1.6 million silver equivalent ounces in finished goods inventory, which will be sold when prices eventually pick up.

Total production in the second quarter of 2022 was 2.1 million silver equivalent ounces, consisting of 1.36 million ounces of silver and 9,289 ounces of gold. Compared to the last year’s comparable quarter, production was up 7%.

Endeavour Silver recorded cash costs per silver ounce of $10.08, down 23% from the year-ago quarter’s level. Consolidated all-in sustaining costs (AISC) of $19.56 per silver equivalent ounce marked a 23% drop from the prior-year quarter’s reading.

On Jul 6, Endeavour Silver completed the previously announced acquisition of SSR Mining Inc.’s (SSRM - Free Report) Pitarrilla Project. Located in Durango, Mexico, the site is one of the largest undeveloped silver deposits in the world and adds to EXK’s growth pipeline in a mining-friendly jurisdiction, where it already has extensive experience and expertise. This move marks a step forward in achieving Endeavour Silver’s goal of becoming a premier senior silver producer. The buyout will boost its pipeline of growth projects, which includes Terronera and Parral.

Pitarrilla is a strategic fit for Endeavour Silver with a successful development, exploration and underground mining track record in the region. The project was de-risked by SSR Mining, with several key exploration and mining permits obtained and collaboration agreements already in place with the local community. The geology at Pitarrilla is similar to Endeavour Silver’s underground mines, namely Guanacevi and Bolanitos, which is an advantage.

Regarding Terronera, EXK stated that it plans to make a formal construction decision, subject to completion of a financing package and receipt of additional amended permits in the coming months. 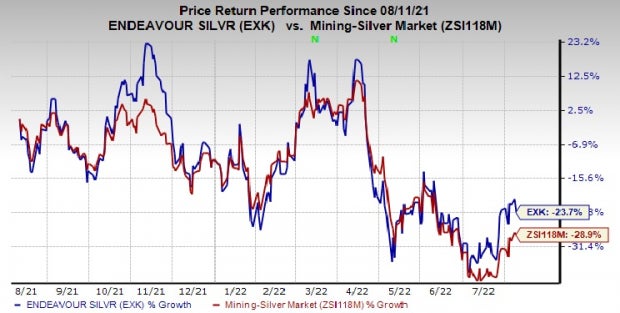 Shares of EXK have fallen 23.7% over the past year compared with the industry's decline of 28.9%.

ASH’s earnings beat the Zacks Consensus Estimate in three of the trailing four quarters and missed the same once. Ashland has a trailing four-quarter earnings surprise of 1.82%, on average. The stock has rallied 22.1% in a year.