Target (TGT - Free Report) and Walmart (WMT - Free Report) were canaries in the consumer coal mines, warning Wall Street back in May about changing shopping patterns and slowing spending. The retailers’ rough reports and downbeat guidance also crucially highlighted the toll inflation was starting to take on margins and earnings. Both TGT and WMT have lowered their guidance again since then.

Target shares have fallen 27% in 2022, with Walmart down 11%. Near-term uncertainty is a given for both stocks in a strange economic environment, highlighted by a stellar jobs market and downbeat consumers who have seen their spending power greatly diminished by inflation.

Inflation and all of the other setbacks aside, Target and Walmart aren’t going anywhere and will continue to dominate the discount retail space. Does that mean it’s time for long-term investors to consider buying either WMT or TGT stock heading into their upcoming earnings releases?

End of the Pandemic Shopper?

Target stock tumbled 25% after its Q1 report on May 18, for its worst showing since Black Monday in 1987. The drop followed its big earnings miss and warnings that fuel and freight costs alone were likely to be $1 billion higher in FY22 than it had previously expected. TGT also said it would avoid passing on higher costs to consumers.

Less than a month later, Target management slashed its outlook again, citing inventory imbalances and more. Target and its peers were huge beneficiaries of the initial covid lockdowns and the post-pandemic boom that saw Americans go on shopping sprees for items such as furniture and TVs.

Shoppers apparently already bought all the big-ticket items they need, causing a mismatch between its inventory and what shoppers want. Target got caught holding onto too much furniture, appliances, and more, and said on June 7 that it would take “actions to right-size its inventory for the balance of the year and create additional flexibility to focus on serving guests in a rapidly changing environment.”

The Minneapolis retailer is set to make additional markdowns, as well as remove excess inventory, and cancel orders. In addition, TGT will add “incremental holding capacity near U.S. ports to add flexibility and speed in the portions of the supply chain most affected by external volatility.” Target is also working to short out ongoing supply chain constraints. 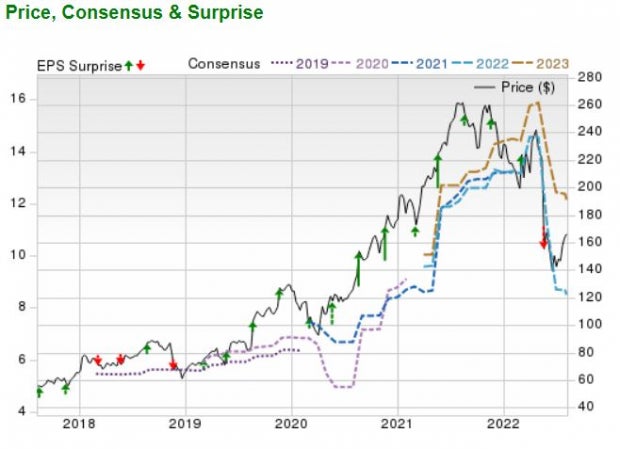 Some of TGT’s Other Fundamentals

Target shares are still up 205% in the past five years vs. the S&P 500’s 75%. Even with the big fall in 2022, TGT is up 30% in the last 24 months. The drop has, of course, recalibrated its valuation. And the retailer flexed its financial strength when it raised its dividend by 20% in early June, with its new quarterly payout yielding 2.6% at the moment.

Target’s expanded e-commerce offerings and same-day services will help it thrive in the have-it-your-way style shopping world that’s here to stay. And Target’s various store brands succeed because of its ability to adapt and stay on-trend, while remaining affordable.

Still, Target’s 2022 and 2023 earnings estimates have fallen off a cliff, and its most accurate/most recent EPS estimates are coming in below the current Zacks consensus. All of this helps TGT land a Zacks Rank #4 (Sell) at the moment.

Zacks estimates currently call for Target’s sales to climb roughly 4% both this year and next. But higher costs are eating into the bottom line, with its adjusted earnings projected to fall 38% YoY in 2022.

Target is set to report its quarterly results on August 17. It’s likely prudent to wait to see if Target’s guidance gets any worse, amid the quickly-changing consumer spending and inflation backdrop.

Some people view Walmart as Target’s bigger, less cool sibling. Still, Walmart and TGT operate essentially the same exact business, which means Walmart suffered a similar first quarter fate as its rival. Like Target, Walmart also warned investors that its results would be worse than it initially projected.

Walmart on July 25 trimmed its guidance, citing the impact of higher costs on shoppers. “The increasing levels of food and fuel inflation are affecting how customers spend, and while we’ve made good progress clearing hardline categories, apparel in Walmart U.S. is requiring more markdown dollars,” CEO Doug McMillon said in prepared remarks.

Walmart anticipates “more pressure on general merchandise in the back half.” Walmart’s adjusted earnings are projected to sink 11.3% this year. But it is not all doom and gloom, with Zacks estimates calling for WMT to post over 4% higher revenue this year (its FY23) and 3% stronger sales in FY24 to hit $615 billion.

It’s worth remembering these estimates could come down even further amid a rapidly evolving consumer spending backdrop. The impact is far-reaching, with Walmart reportedly in the process of laying off hundreds of corporate workers as it stares at sliding profits. 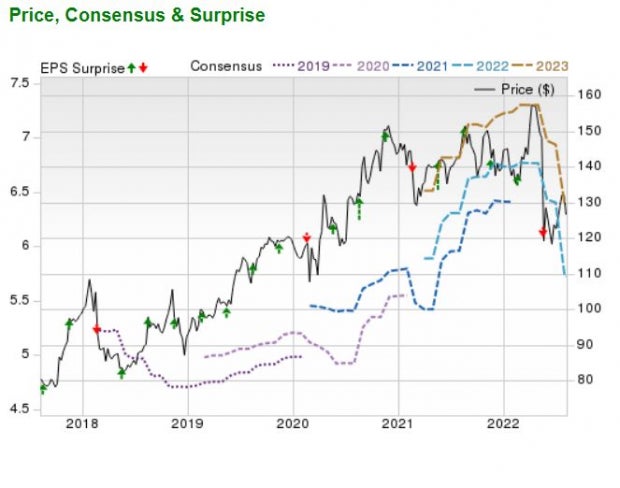 Walmart operates multiple delivery and pick-up options and its e-commerce platforms grow larger by the day. WMT boasts partnerships with trendy, digital native retailers and it has struck deals with Shopify and others to bring more small businesses to its own third-party marketplace.

Walmart’s growing, higher-margin digital ad unit could also help increase its earnings down the road, as digital retailers begin to thrive in the online advertising ecosystem. Walmart is also actively expanding its in-store healthcare offerings and beyond.

That said, Walmart’s recent downward earnings revisions help it land a Zacks Rank #4 (Sell) at the moment. On top of that, WMT’s recent comeback, mixed with its downbeat earnings outlook, has it trading where it was directly prior to its mid-May selloff at 21.3X forward earnings. And its 1.7% dividend yield barely outpaces the S&P 500.

Walmart is scheduled to release its Q2 FY23 financial results on August 16. All in, the safest option appears to be to wait and see how its actual results and its updated outlook come in before diving back in.