Barring one-time items, adjusted earnings were 30 cents per share, which missed the Zacks Consensus Estimate of 71 cents. Our estimate for the quarter was 71 cents.

The company generated net sales of $856.6 million in the second quarter, up around 62% year over year. The figure missed the Zacks Consensus Estimate of $928 million. Our estimate for the quarter was $928.1 million.

Shipments of primary aluminum were 214,084 tons, up around 12% year over year. This compares to the consensus estimate of 221,050 tons million and our estimate of 220,800 tons. Shipments also rose 1% sequentially, driven by higher volumes at Mt. Holly.

At the end of the quarter, the company had cash and cash equivalents of $30 million, a roughly three-fold year-over-year increase.

Net cash provided by operating activities was $68.6 million in the six months ended Jun 30, 2022 against net cash used of $87.9 million in the year-ago period.

Century Aluminum stated that it continues to position it to benefit from long-term trends in value-added aluminum products through its Grundartangi casthouse and North America casthouse debottlenecking projects. Global energy prices remain elevated, exacerbated by the Russia-Ukraine war and unfavorable weather conditions. The company has taken necessary actions to preserve the competitiveness of its businesses to improve cash flow amid the inflationary environment.

Shares of Century Aluminum have dropped 24.5% in the past year compared with a 21.4% decline of the industry. 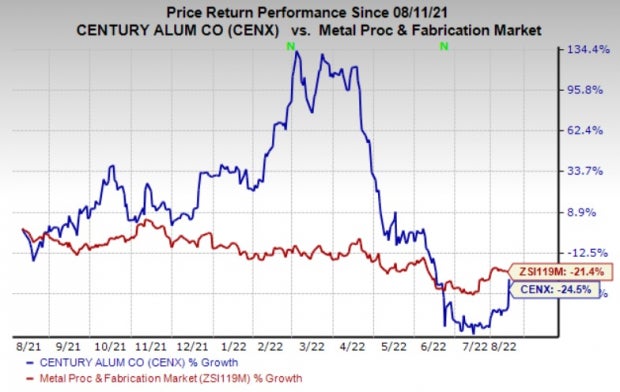 Sociedad’s earnings beat the Zacks Consensus Estimate in two of the trailing four quarters, the average being 28.2%. SQM has rallied roughly 91% in a year. The company sports a Zacks Rank #1 (Strong Buy). You can see the complete list of today’s Zacks #1 Rank stocks here.

Albemarle’s earnings beat the Zacks Consensus Estimate in each of the last four quarters. It has a trailing four-quarter earnings surprise of roughly 24.2%, on average. ALB has gained around 10% in a year and currently carries a Zacks Rank #1.

Daqo New Energy, currently carrying a Zacks Rank #1, has an expected earnings growth rate of 160.8% for the current year. The Zacks Consensus Estimate for DQ's earnings for the current fiscal has been revised 13.5% upward in the past 60 days.

Daqo New Energy’s earnings beat the Zacks Consensus Estimate in three of the trailing four quarters, the average being 10.8%. DQ has gained around 23% over a year.