The biotech sector has been in the spotlight in the past week on earnings releases.  Acquisitions and collaborations were also in the spotlight. Other pipeline and regulatory updates grabbed focus as well.

Amgen’s Q2 Earnings, CCXI Deal: Amgen (AMGN - Free Report) beat on both counts in the second quarter. It reported revenues of $6.59 billion in the second quarter, which beat the Zacks Consensus Estimate of $6.54 billion and were up 1% year over year, driven by growth in product sales. Earnings of $4.65 per share easily beat the Zacks Consensus Estimate of $4.40 and jumped from $1.77 reported in the year-ago quarter. Lower operating expenses and share count boosted earnings in the quarter.

Concurrently, Amgen announced that it will acquire ChemoCentryx for $52 per share in cash or approximately $3.7 billion. The acquisition will add ChemoCentryx’s newly approved drug, Tavneos (avacopan) to Amgen’s inflammation and nephrology portfolio. Tavneos is an orally administered selective complement component 5a receptor inhibitor. It was approved by the FDA in October 2021 as an adjunctive treatment for adult patients with severe active ANCA-associated vasculitis, specifically granulomatosis with polyangiitis (GPA) and microscopic polyangiitis (MPA) (the two main forms of ANCA-associated vasculitis), in combination with standard therapy.  Sales of the drug came in at $5.4 million.  Shares of ChemoCentryx almost doubled on the same.

The acquisition has been unanimously approved by the board of directors of both companies. It is expected to close in the fourth quarter of 2022, subject to shareholders’ approval and other regulatory approvals.

Mersana Surges on GSK Deal:  Shares of clinical-stage biopharmaceutical company Mersana Therapeutics, Inc. (MRSN - Free Report) surged after the company announced a collaboration deal with GSK plc (GSK - Free Report) .  The acquisition provides GSK an exclusive option to co-develop and commercialize XMT-2056, an Immunosynthen ADC that targets a novel epitope of HER2. XMT-2056 is designed to activate the innate immune system through STING signaling in both tumor-resident immune cells and tumor cells. Per the terms, Mersana will receive an upfront option purchase fee of $100 million. Mersana is also eligible to receive up to $1.36 billion in the form of an option exercise payment and development, regulatory and commercial milestone payments if GSK exercises its option.

Mersana has retained options to profit-share and to co-promote in the United States and is entitled to receive tiered royalties on net sales outside of the United States if it exercises this option. If Mersana does not elect to profit-share, it is eligible to receive double-digit tiered royalties on global net sales. Mersana expects to initiate an initial stage study of XMT-2056 to investigate its potential in a range of HER2-expressing tumors such as breast, gastric and non-small-cell lung cancers.

The increase was attributable to robust sales of Kaftrio/Trikafta in international markets following new reimbursements recently secured in France, Spain and Italy.

The Nasdaq Biotechnology Index has gained 5.32% in the past five trading sessions. Among the biotech giants, Vertex has gained 7.54% during the period. Over the past six months, shares of Vertex have surged 25.38%. (See the last biotech stock roundup here: Biotech Stock Roundup: BMY, BIIB’s Q2 Earnings, GILD’s Updates & More) 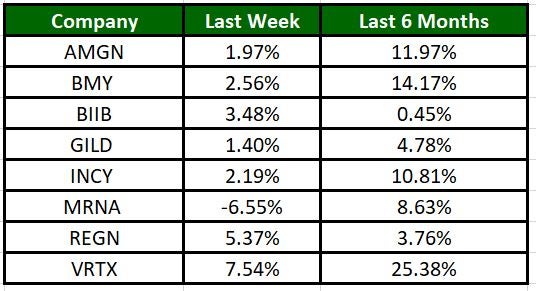 Agilent (A) to Report Q3 Earnings: What's in the Cards?