Including one-time items, Pan American Silver reported a loss of 83 cents per share in the quarter against the year-ago quarter’s earnings of 34 cents.

Silver production in the quarter was 4.5 million ounces, up 1.2% year over year. Gold production was recorded at 128.3 thousand ounces in the reported quarter, reflecting a year-over-year decline of 10%.

The Gold segment’s cash costs were $1,132 per ounce, reflecting a 32% surge from the year-ago quarter’s figure. The segment’s AISC costs amounted to $2,051 per ounce in the April-June period, representing a year-over-year increase of 76%.

Pan American Silver reported a mine-operating loss of $32.6 million in the quarter. Earnings of $103 million were reported in the second quarter of 2021.

At the end of second-quarter 2022, Pan American Silver had cash and short-term investment balances of $241.3 million and $500.0 million available in its revolving credit facility. Total debt amounted to $63.2 million, related to lease liabilities and construction loans. Net cash generated from operations was $20.8 million in the second quarter compared with $87 million in the prior-year period.

Pan American Silver reaffirms its current-year financial and production guidance. Silver production for the year is expected between 19 million ounces and 20.5 million ounces. Silver segment cash costs are expected to be $10.70-$12.20 per ounce. AISC is estimated between $14.50 per ounce and $16.00 for the ongoing year. 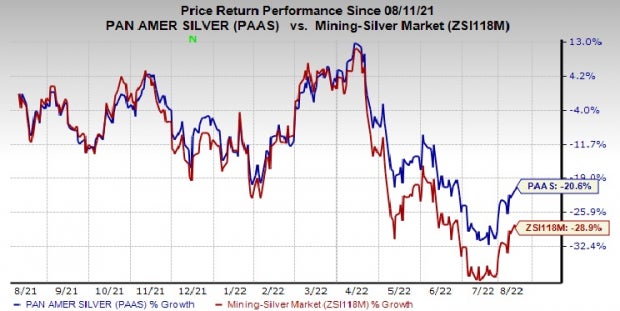 Shares of Pan American Silver have declined 20.6% in the past year compared with the industry’s decrease of 28.9%.

ASH’s earnings beat the Zacks Consensus Estimate in three of the trailing four quarters and missed the same once. Ashland has a trailing four-quarter earnings surprise of 1.82%, on average. Its shares have been up around 22.1% in a year.

Albemarle’s earnings beat the Zacks Consensus Estimate in each of the trailing four quarters, the average being 20%. ALB has gained roughly 18% in a year and has a Zacks Rank of 2 at present.