Constellation Brands Inc. (STZ - Free Report) has been gaining from unparalleled strength in its beer business, which has been a key growth driver for years. Further, its wine & spirits business has been benefiting from its premiumization strategy focused on making investments to fuel growth of its power brands through innovation, capitalizing on priority, consumer trends, and product introductions. Its endeavors to adapt to the changes in the market, particularly growth of hard seltzer, have been tailwinds.

Constellation Brands’ shares have rallied 13.9% in the past year, against the industry’s decline of 0.5%. The stock performance also compared favorably with the sector’s 3.2% decline and S&P 500’s 5.5% fall. 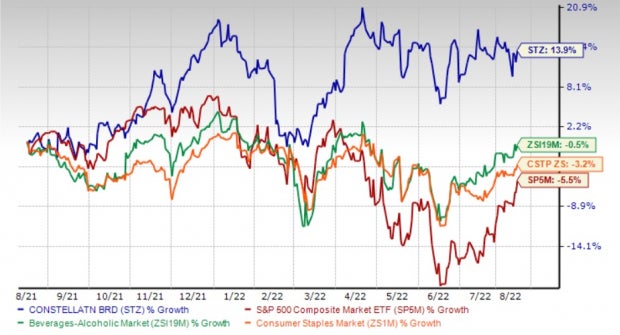 Constellation Brands' premiumization strategy is playing out well, as evident from the accelerated growth of Power Brands in first-quarter fiscal 2023. The company's high-end Power Brands, including The Prisoner Brand Family, Kim Crawford and Meiomi, were key growth drivers. Sales in the wine and spirits segment rose 2% in the fiscal first quarter, with organic net sales growth of 5%. The improvement was driven by shipment and depletion growth for the segment.

Shipment volume in the wine and spirits business was up 1.5%, whereas depletions improved 1.2%. Depletion growth for the segment can be attributed to double-digit gains for Meiomi, The Prisoner Wine Company, High West Whiskey and Casa Noble Tequila. For fiscal 2023, the company expects net sales for the wine and spirits business to decline 1-3%, while the operating income is envisioned to grow 4-6%.

The beer segment witnessed gains from premiumization, driven by growth in traditional beer, as well as flavors category, including seltzers, flavored beer, RTD spirits, and flavored malt beverages. The company is making investments to fuel growth of its power brands through innovation, capitalizing on priority and consumer trends, with successful product introductions. Earlier, Constellation Brands signed a brand authorization agreement with Coca-Cola (KO - Free Report) to manufacture, market and distribute the new FRESCA Mixed cocktails in the United States. As part of the deal, Fresca Mixed is likely to be launched this fall in vodka strips and tequila Paloma.

Coca-Cola is diversifying its portfolio to tap into the rapidly growing ready-to-drink (RTD) category. Notably, RTD has emerged as the fastest-growing alcohol segment since 2018 and is expected to rise 29% over the next three years, per IWSR Drinks Market Analysis. KO has made four new alcoholic drink launches in less than two years, strengthening its presence in the alcoholic beverage space. It has also tied up with Brown-Forman Corporation (BF.B - Free Report) and Molson Coors (TAP - Free Report) to launch RTDs.

In June 2022, Coca-Cola collaborated with Brown-Forman to introduce the iconic Jack & Coke cocktail. The new RTD pre-mixed cocktail will be made using Jack Daniel’s Tennessee Whiskey and Coca-Cola. The companies intend to launch the cocktail initially in Mexico and make it available in markets worldwide from late 2022.

With Molson Coors, KO has agreements in place to launch Topo Chico Hard Seltzer and Simply Spiked Lemonade. Molson Coors is one of the largest brewers in the world and boasts a strong portfolio of well-established brands. TAP remains committed to growing its market share through innovation and premiumization.

Coming back to Constellation Brands, it is also on track with its plans to invest in the next phase of capacity expansion in Mexico. This will help meet the potential demand for the high-end Mexican beer portfolio, including the emerging Alternative Beverage Alcohol sub-space, which includes hard seltzers.

The company outlined plans for incremental capacity expansion in Mexico to support growth of its high-end Mexican beer portfolio. It anticipates a total capital expenditure of $5-$5.5 billion for the beer business between fiscal 2023 and fiscal 2026. This includes the earlier-stated annual capital expenditure of $700-$900 million for the beer business from fiscal 2023 to fiscal 2025. The latest expansion will support an additional capacity of 30 million hectoliters of modular capacity and includes the construction of a brewery in Southeast Mexico in Veracruz. It also targets continued expansion and the optimization of the existing Nava and Obregon breweries.

We believe that the company’s investments in high-end beer and spirit brands, as well as efforts to explore the hard seltzer market, are likely to provide it an advantage over peers.