In the past week, Ryanair Holdings (RYAAY - Free Report) was the chief newsmaker following its decision to increase the projection for the number of passengers to be transported in fiscal 2023 (ending Mar 31, 2023). American Airlines (AAL - Free Report) was also in the news, courtesy of its management’s decision to expand its regional operations. To this end, AAL inked a five-year deal with Air Wisconsin. Meanwhile, JetBlue Airways (JBLU - Free Report) reportedly announced some route cuts to ensure operational efficiency.

AAL also grabbed the headlines recently when it inked a deal with Boom Supersonic to purchase up to 20 Overture planes from the latter. The story was reported in detail in the previous week’s write-up.

1. Ryanair now expects passenger volumes for fiscal 2023 to be 166.5 million. The previous expectation was 165 million. Ryanair augmented its UK capacity by adding one million plus seats to/from 20 airports in the UK.

The raised forecast is owing to management’s decision to boost the airline’s UK winter schedule following a reduction in the winter schedule capacity of its rival British Airways. RYAAY currently carries a Zacks Rank #3 (Hold).

2. With an eye on maintaining its operations to small markets, American Airlines announced that Air Wisconsin will be part of the American Eagle family by March 2023 in the face of acute pilot crisis. Air Wisconsin’s fleet will start operating for American Eagle within next March. American Eagle is a network of multiple regional carriers that operate under a codeshare and service pact with AAL.

Per the terms of the deal, Air Wisconsin will be responsible for operating up to 60 aircraft of its fleet of 50-seat CRJ-200s, primarily from AAL’s hub at the Chicago - O’Hare International. Currently, Air Wisconsin operates flights for United Airlines (UAL - Free Report) from the latter’s (Chicago-based carrier) hubs at O’Hare and Dulles International Airports. Air Wisconsin’s partnership with UAL is likely to come to an end, in accordance with its terms.

3. Management at JetBlue decided to trim its network by terminating services to some destinations. To this end, JBLU decided to stop its nonstop flights from San Francisco International Airport to Newark after Sep 6, 2022.  Per a statement issued by the management, “To ensure continued operational reliability, we’re planning a schedule change for this fall and into 2023 that will extend some of the market suspensions we put in place earlier this year,”

4. Per a CNBC report, the U.S. administration decided to suspend 26 flights to China from the United States by four Chinese carriers, namely Xiamen, Air China, China Southern Airlines and China Eastern Airlines. The decision, which will impact flights from Sep 5 to Sep 28, follows a similar ruling from the Chinese government, whereby 26 U.S.-bound flights by Delta, American Airlines and United Airlines were suspended due to COVID-19 cases. 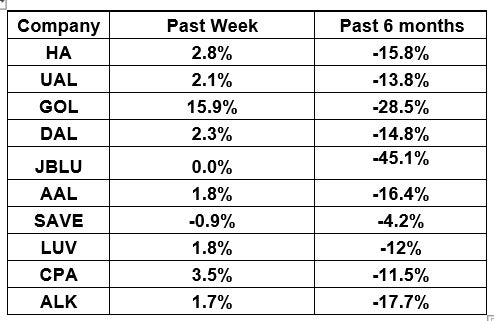 Stay tuned for usual news updates on the space.