The contract is projected to be completed by Aug 31, 2027. With a maximum value of $5.02 billion, this contract requires Boeing to provide overall GMD Element engineering, integration, including physical and logical integration of the GMD Element and components, and GMD integration with the Missile Defense System.

Per this contract, Boeing will also have to perform day-to-day systems operations and readiness, routine maintenance functions, analysis related to GMD Element health and availability, and execute failure/fault checklists, as appropriate.

Work related to this deal will be executed in Huntsville, AL.

The GMD system is the United States' only operationally deployed missile defense program capable of defending the entire U.S. homeland (including Alaska and Hawaii) against long-range ballistic missile attacks. GMD is designed to detect, intercept and destroy long-range ballistic missiles during their midcourse phase of flight. The system provides early detection and tracking during the boost and midcourse phase, as well as target discrimination, precision intercept and destruction of the target through the force of the collision. GMD is an integral element of the U.S. Missile Defense Agency's layered ballistic missile defense architecture.

Per a report by the Allied Market Research firm, the global rocket and missile market is projected to expand at a CAGR of 4.2% during the 2022-2031 period to reach $82 million by 2031. Such massive growth projections indicate solid opportunities for Boeing, which is the manufacturer of missile defense products, including Aegis Ballistic Missile Defense, Avenger and PAC-3 Missile Seeker. The rocket and missile market growth will also bolster other defense contractors like Raytheon Technologies (RTX - Free Report) , Northrop Grumman (NOC - Free Report) and Lockheed Martin (LMT - Free Report) , which specialize in developing technologically advanced missiles.

Lockheed boasts a long-term earnings growth rate of 5.4%. LMT stock has risen 18.7% in the past year.

Shares of Boeing have rallied 10.3% in the past three months against the industry’s fall of 1.4%. 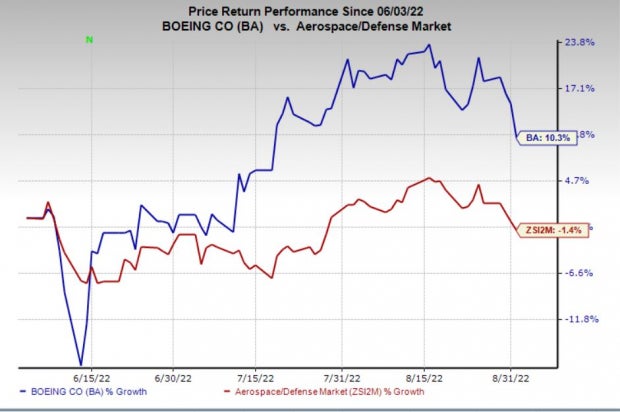 WRB or ACGL: Which P&C Insurance Stock Should You Buy?