Valued at $927.5 million, the contract is projected to get completed by Dec 31, 2026. Per the terms of the deal, Boeing will also provide non-recurring engineering design and test for the Remote Vision System 2.0 along with the Air Refueling Operator Station 2.0 mission equipment and installation, pre-delivery integrated logistics support, and technical publications for the aforementioned aircraft.

Work for this contract will be executed in Seattle, WA.

The KC-46 Pegasus is a wide-body, multirole tanker that can refuel all U.S. allied and coalition military aircraft compatible with international aerial refueling procedures. Boeing initially designed KC-46 to carry passengers, cargo and patients. The aircraft is also equipped to detect, avoid, defeat and survive threats using multiple layers of protection, which will enable it to operate safely in medium-threat environments.

With growing security threats across the globe, emerging economies like the Asia Pacific, the Middle East and South America are spending a lot on enhancing their defense arsenals. Meanwhile, developed nations like the United States and Europe have already been leading the defense market for some time now.

It is imperative to mention in this context that military aircraft, both manned and unmanned, form an integral constituent of a country’s defense products. Notably, emerging trends in the combat aircraft space like the fifth-generation technology aircraft, advanced composite materials, stealth technology and refueling jets like KC-46 have been driving demand substantially.

Being the United States’ largest jet maker, Boeing enjoys a smooth flow of contracts for military jets and their associated upgrades. The latest contract win is an example of the same.

Per a Mordor Intelligence report, the global combat aircraft market is expected to witness a CAGR of more than 4% during the 2022-2031 time period, with North America constituting the largest share of this market. This can be attributed to a rise in global threats and geopolitical instabilities as well as increased spending on defense. This should benefit Boeing along with other U.S.-based combat jet manufacturers like Northrop Grumman (NOC - Free Report) , Lockheed Martin (LMT - Free Report) and Textron (TXT - Free Report) .

Lockheed boasts a long-term earnings growth rate of 5.4%. LMT stock has gained 16.8% in the past year.

Since its inception, Northrop Grumman has been a pioneer in the development of manned aircraft for combat. Northrop Grumman also has a tradition of providing technological leadership in military aviation and aircraft, such as manned, unmanned, targeting, surveillance, and aircraft self-protection systems that enable warfighters to accomplish missions anytime, anywhere and under any conditions.

Northrop Grumman boasts a long-term earnings growth rate of 2.2%. NOC stock has gained 30% in the past year.

Textron boasts a long-term earnings growth rate of 12.5%. The Zacks Consensus Estimate for TXT’s 2022 sales implies an improvement of 6% from the 2021 reported figure.

Shares of Boeing have rallied 9% in the past three months against the industry’s fall of 2.1%. 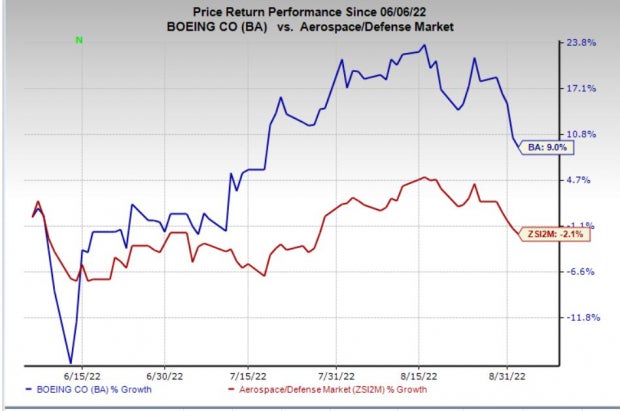