Drug approvals and other regulatory updates are in focus in the biotech sector. The sector is also witnessing consolidation as M&A activities pick up.

Updates From Gilead: Gilead Sciences, Inc.’s (GILD - Free Report) Kite announced that the European Commission (“EC”) approved its CAR T-cell therapy Tecartus (brexucabtagene autoleucel) for the treatment of relapsed or refractory (r/r) B-cell precursor acute lymphoblastic leukemia (ALL). Tecartus has been approved for this indication for adult patients 26 years of age and above.

The EC nod was supported by data from the phase I/II ZUMA-3 study of adult patients (≥18 years old) with relapsed or refractory ALL.  The CHMP had earlier given a positive opinion on the same.  Another cell therapy in Kite’s kitty is Yescarta.  The latest approval marks Kite’s fourth indication in Europe for its two cell therapies and first in leukemia.

Spero Surges on FDA Update:  Spero Therapeutics (SPRO - Free Report) surged after the company provided a positive update following the receipt of minutes from a recent Type A meeting with the FDA on its experimental candidate tebipenem HBr.  The meeting was conducted to discuss the steps required to resubmit the new drug application (NDA) for tebipenem HBr to treat complicated urinary tract infection (cUTI), including pyelonephritis. Spero received a complete response letter (CRL) from the FDA in June 2022 for the same as the agency concluded that the data from phase III ADAPT-PO study were insufficient to support approval during the prior review cycle.

During the above-mentioned type A meeting, the FDA indicated that positive results from a single additional phase III study supported by confirmatory nonclinical evidence of efficacy could be sufficient to back the approval of tebipenem HBr for the treatment of cUTI, including pyelonephritis for a limited use indication.  Spero also reached alignment with the FDA on key components of the proposed pivotal phase III study design, which may be the subject of a Special Protocol Assessment (SPA) request, to be confirmed once the clinical protocol is finalized.

Forma Surges in Novo Nordisk Deal: Shares of clinical-stage biopharmaceutical company Forma Therapeutics Holdings Inc. skyrocketed after pharma giant Novo Nordisk (NVO - Free Report) announced that it will acquire the former for $20 per share in cash, which represents a total equity value of $1.1 billion.  The acquisition will add Forma’s lead candidate etavopivat to Novo Nordisk’s pipeline. Etavopivat, an investigational oral, once-daily, selective pyruvate kinase-R (PKR) activator, is being developed to improve anemia and red blood cell health in people with sickle cell disease (SCD). Novo Nordisk is looking to venture into the field of SCD and other rare blood disorders. The offer price represented a premium of 92% to Forma’s volume-weighted average price per share over the 30 days ended Aug 31, 2022.

Vertex’s CF Drug Label Expansion:  Vertex Pharmaceuticals (VRTX - Free Report) obtained FDA nod for the label expansion of its cystic fibrosis (CF) drug Orkambi (lumacaftor/ivacaftor) in children aged 12 months to less than 24 months. The approval covers treatments of CF in toddlers who are homozygous for the F508del mutation in the cystic fibrosis transmembrane conductance regulator (CFTR) gene. Prior to label expansion, Orkambi was already approved by the FDA to treat CF in people aged two years and older with two copies of the F508del mutation.

The latest approval for Orkambi was based on data from a phase III study that evaluated the drug in participants aged one year to less than two years over a 24-week period. Data from the study showed that participants treated with Orkambi demonstrated a safety profile and pharmacokinetics identical to those observed in patients aged two years and older who were treated with the drug. Additional data from the study also showed that Orkambi has the potential for CF disease modification, including a reduction in sweat chloride concentration. 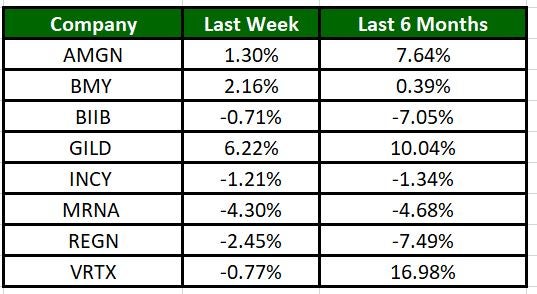 The Nasdaq Biotechnology Index has lost 1.24% in the past four trading sessions. Among the biotech giants, Gilead has gained 6.22% during the period. Over the past six months, shares of Vertex have jumped 16.98%. (See the last biotech stock roundup here: Biotech Stock Roundup: BMYs Study Update, INCYs Drug Label Expansion, MRNA News)