In March 2022, SunPower launched the Dealer Accelerator Program to boost the growth of the local solar dealer platform, thus assisting in the faster adoption of renewable energy across the United States.

As part of the program, SPWR invests in solar dealer businesses that boast strong prospects while supporting their development through enhanced lead generation and strategic business plans.

Before Renova and EmPower, SunPower invested in Freedom Solar Power and Sea Bright Solar. This highlights the company’s continuous focus on tapping the increased demand for solar products in the United States through a strong channel of distributors.

Such programs will assist the company in the increased penetration of its products and provide extensive network advantages, thereby boosting revenues.

As the federal incentivizes the clean energy sector to promote and accelerate the pace of green energy adoption, solar companies have become attractive. Buoyed by the probable increase in demand in the days ahead, solar companies are increasingly focusing on augmenting their business strength either by capacity expansion and new collaborations with installers or product introduction.

In this context, apart from SunPower, solar companies that have adopted measures for production ramp-up or launched new products in the solar energy landscape to reap the benefits of the intensified demand are as follows:

In September 2022, Canadian Solar (CSIQ - Free Report) announced the launch of the battery storage solution EP Cube for homeowners and SolBank for utility-scale operations at the RE+ trade show. Also, the company intends to scale up its battery manufacturing capacity to 10 gigawatt-hours by the end of 2023.

The Zacks Consensus Estimate for Canadian Solar’s 2022 earnings suggests a growth rate of a solid 135.4% from the prior-year reported figure. CSIQ shares have returned 10.6% in the past year.

In August 2022, First Solar (FSLR - Free Report) announced that it plans to invest up to $1.2 billion in scaling the production of photovoltaic solar modules and boost its production capacity to more than 10 gigawatts by 2025.

First Solar’s long-term earnings growth rate is pegged at 49.3%. FSLR shares have risen 27.5% in the past year.

In the past year, shares of SunPower have risen 22.2% compared with the industry’s 16.9% growth. 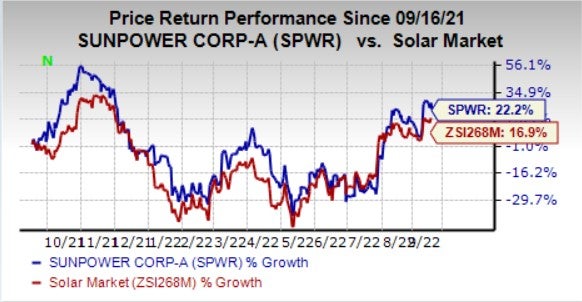 The Zacks Consensus Estimate for Enphase Energy’s 2022 sales suggests a growth rate of 63% from the prior-year reported figure. Shares of ENPH have surged 98.9% in the past year.