Intellia Therapeutics (NTLA - Free Report) and its partner Regeneron Pharmaceuticals (REGN - Free Report) recently announced positive interim results from an ongoing phase I study of its lead candidate NTLA-2001. The candidate is being developed as a single-dose treatment for transthyretin (ATTR) amyloidosis.

The interim data include results from 12 ATTR amyloidosis adult patients with cardiomyopathy (ATTR-CM) and class I-III heart failure, who were administered NTLA-2001 in single doses of 0.7 mg/kg and 1.0 mg/kg intravenously. The change in serum transthyretin (TTR) protein concentration from baseline was measured for each patient.

NTLA-2001 was overall well-tolerated in the subjects at both dose levels.

Two patients out of the 12 enrolled reported transient infusion reactions, which was the only observed treatment-related side effect. Clinically significant liver findings were not observed at any of the dose cohorts of the phase I study.

NTLA-2001 is a CRISPR/Cas9-based therapy candidate being developed by Intellia and Regeneron for treating patients with either ATTR-CM or hereditary ATTR amyloidosis with polyneuropathy (ATTRv-PN).

Per the management, a protocol amendment has been submitted to finalize the selection of a fixed dose at or near the dose equivalent of 0.7mg/kg for the dose-expansion portion of the study. Once the dose is finalized, NTLA-2001 will be evaluated at the fixed dose across both arms of the study. The enrollment across both arms is expected to be completed by the end of 2022.

Shares of Intellia have declined 44.4% in the year-to-date period compared with the industry’s fall of 22.4%. 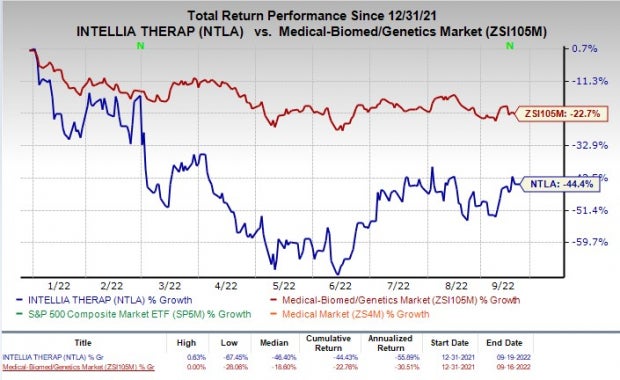 In a separate press release, Intellia announced top-line positive interim data from its ongoing phase I/II study evaluating its second in vivo genome editing candidate NTLA-2002 to treat hereditary angioedema (“HAE”). HAE is a condition in which the KLKB1 gene in hepatic cells produces kallikrein protein that causes dangerous swelling throughout the body.

NTLA-2002 was tested in six adult HAE patients in the ongoing dose-escalation study in single doses of 25mg and 75mg. The changes in plasma kallikrein protein’s value from the baseline were measured for each patient.

NTLA-2002 achieved mean reductions of 65% and 92% in plasma kallikrein in the dose cohorts of 25mg and 75mg, respectively. The reductions were sustained for at least 16 weeks in the 25 mg cohort and eight weeks in the 75 mg cohort.

NTLA-2002 was also well tolerated at both dose cohorts.

Earnings of Sesen Bio missed estimates in all of the trailing four quarters. The average negative earnings surprise for SESN is 89.49%.