To strengthen its position in Germany, Tesla (TSLA - Free Report) expects to significantly ramp up sales in the country, where it opened a new assembly plant in March to build Model Y cars. It reported that it aims to massively scale up production to reach 80,000 units in 2022.

Tesla’s Model Y has proven to be the major contributor to the company’s robust position in Germany. The vehicle has become Tesla’s most popular offering in the country, fetching the most private new registrations.

Efforts are underway at the Giga Berlin to ramp up Model Y production. The factory has started producing 1,000 vehicles per week and aims to reach 5,000 units weekly by the first quarter of 2023.

However, there is a brewing problem for the company in the face of rapidly soaring electricity prices.  Amid ramp-up plans at Giga Berlin, in a major setback, the EV giant was recently forced to hold back on its factory expansion plan. Tesla had intended to increase the factory by one-third and expand the nearly 750-acre factory site by another 250 acres to develop a freight depot, besides other factory parts.

In May, the automaker sent in an application to increase the factory by a third by beginning construction on a further 100 hectares from the existing plant.

However, the municipal council of Grünheide, the city near Berlin where the Gigafactory is located, has indefinitely delayed the vote on the planned expansion. Even though the reasons for the delay are unclear, the ripple effects of the ongoing energy spiral may be hinted at.

Germany has been caught up in the energy crisis brought by the Russia-Ukraine conflict and recessionary trends. Europe is heavily dependent on Russia for natural gas, and as a retaliation move, Russia has snapped off gas supplies to the continent in general, Germany in particular. A healthy energy market is an essential requirement for EV production to thrive. However the volatile and uncertain situation has affected the EV market, with the Center Automotive Research predicting EV sales to suffer a cost disadvantage in Germany from 2023. The loss of subsidies is also somewhat hampering the profitability of electric cars.

With rising costs due to a tight market, the government has decided to bring down subsidies at year-end. Warnings are rife that the country should brace itself for a price wave to hit the electricity sector. Consumer electricity prices are expected to rise in Germany by about 60% in 2023, according to the Association of Local Public Utilities. This will discourage buyers from switching to EV.

For a giant like Tesla, the surging electricity price is the major concern as it can survive without subsidies. Its intensive development plans call for a heavy energy requirement, and the EV giant is skeptical about the success of its planned expansion in the country.

Giga Berlin was on a production spree in June, building around 1,000 Model Y units in a single week while producing more vehicles globally than in any month in its history.

Despite the record production month, Tesla chief, Elon Musk, had put forth financial concerns over the past few months, citing that the automaker did not have a smooth second quarter and that the company’s new factories weigh on finances. The current situation undoubtedly adds to woes as it is uncertain whether it would impact Tesla’s timeline for a production boost.

In China, Tesla is making positive moves. In August, it announced 40 new Supercharger stations in the country, adding 168 individual Superchargers to the country’s infrastructure of Tesla-specific EV chargers. The development is an addition to the automaker’s accomplishment of completing capacity expansion projects at its factory in Shanghai. This has made wait times for Tesla EVs in China the shortest in several years. Every Supercharger installed in China was a V3, which is the company’s most advanced released technology for charging cars.

Giga Shanghai has been a hotbed of EVs not only for the China market but also for foreign customers, as Tesla exports some of the vehicles produced at the factory to Europe. The increase in Supercharging stations in China supplements the automaker’s strong sales figures for August. In the month, Tesla delivered 76,965 vehicles in China, per government data. It was Tesla’s second-best sales month in 2022 after June, when it sold 78,906 cars.

After a production hiatus in China in the wake of a resurgence of Covid lockdowns, the automaker is again up in the grind to push its EV market in the country.

Shares of Tesla have soared 23.5% over the past year, outperforming its industry’s rise of 2.5%. 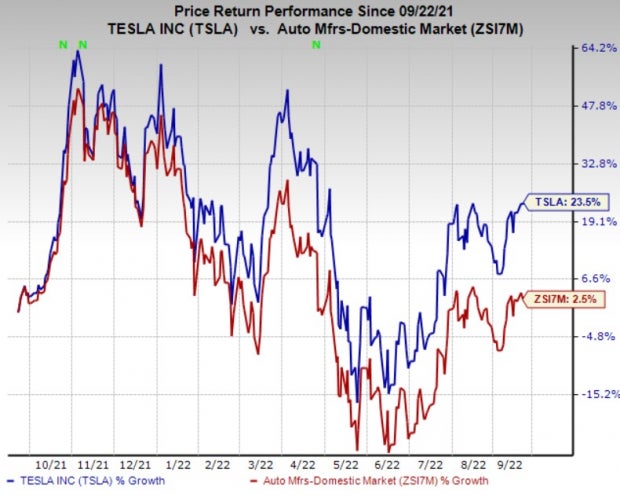 Yamaha’s earnings beat the Zacks Consensus Estimate in three of the trailing four quarters and missed in one. YAMHF pulled off a trailing four-quarter earnings surprise of 47.95%, on average. The stock has declined 29.3% over the past year.

BorgWarner has an expected earnings growth rate of 2.9% for the current year. The Zacks Consensus Estimate for current-year earnings has remained constant in the past 30 days.

BorgWarner’s earnings beat the Zacks Consensus Estimate in all the trailing four quarters. BWA pulled off a trailing four-quarter earnings surprise of 29.45%, on average. The stock has declined 14.7% in the past year.

Ford has an expected earnings growth rate of 31.5% for the current year. The Zacks Consensus Estimate for current-year earnings has remained constant in the past 30 days.

Ford’s earnings beat the Zacks Consensus Estimate in two of the trailing four quarters and missed in two of them. F pulled off a trailing four-quarter earnings surprise of 24.55%, on average. The stock has declined 1.1% in the past year.

Wave Therapeutics (WVE) Up on Update From Huntington's Study