Warren Buffett Has Made These 3 Moves in 2022

Warren Buffett instantly comes to mind when thinking of high-profile names in the financial world. Known for amassing a fortune within the stock market, it’s easy to see why some call him one of the most successful investors of all time.

Buffett is the CEO of Berkshire Hathaway, a diversified holding company whose subsidiaries engage in insurance, freight rail transportation, energy generation and distribution, manufacturing, and many others.

Investors track every move he makes.

And that’s what we’re here to look at today.

Below is a year-to-date chart illustrating the performance of all three of his buys with the S&P 500 blended in as a benchmark. 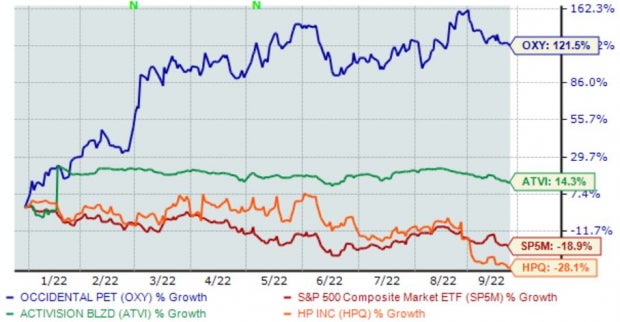 Let’s take a deeper dive into each one.

Activision Blizzard is a leader in video game development and an interactive entertainment content publisher, most well-known for its hit franchise Call of Duty.

Berkshire has been adding to its position within Activision Blizzard for a merger arbitrage play, meaning there’s a strong belief that the acquisition will go through at the agreed-upon $95 per share price tag.

With ATVI shares currently trading around $75 per share, the current $95 per share price tag reflects an upside of nearly 27%. Needless to say, that would be a very sizable gain.

Activision Blizzard’s growth trajectory is forecasted to take a sizable hit in FY22, with earnings and revenue projected to decline by 24% and 4%, respectively.

In FY23, however, the growth picture turns visibly green – earnings are forecasted to climb 30%, and revenue looks to climb a double-digit 18%. 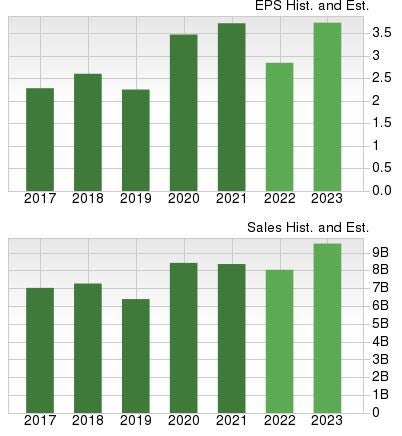 Founded in 1920, Occidental Petroleum Corporation is an integrated oil and gas company with significant exploration and production exposure. OXY operates through three segments: Oil and Gas, Chemical, and Midstream and Marketing.

Buffett has been buying OXY stock aggressively, signaling a substantial bet on the energy sector. So far, in 2022, the strategy has handsomely paid off amid the boom in energy.

To little surprise, the company’s earnings outlook has turned notably bright over the last several months.

Of course, OXY’s growth prospects are stellar – earnings are forecasted to soar by an incredible triple-digit 330% Y/Y in FY22.

And the growth doesn’t stop there, of course – OXY’s annual revenue is projected to climb nearly 50% Y/Y in FY22. 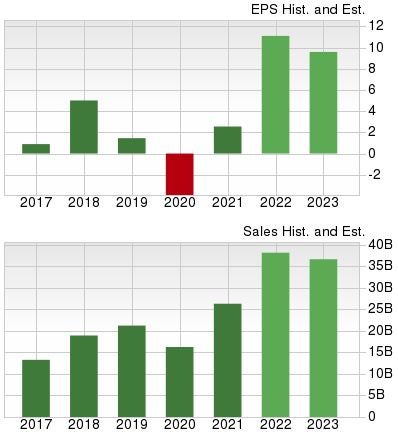 Further, the company has a very favorable free cash flow trend, as seen in the chart below. In its latest print, OXY reported quarterly free cash flow of a steep $4.4 billion, penciling in a massive 70% Y/Y uptick and a 66% sequential increase.

HP is a leading provider of personal computing and other access devices to consumers globally. It’s worth noting that HP Inc. is the surviving entity following the November 2015 split of Hewlett-Packard into two separate publicly traded entities.

The purchase looks like a classic Buffett value play – HPQ’s 6.5X forward earnings multiple is cheap, nowhere near its 9.1X five-year median, and representing a massive 70% discount relative to its Zacks Computer and Technology Sector.

Undoubtedly warranting concern, analysts have been bearish on their earnings outlook over the last several months with a 100% revision agreement percentage. Its Zacks Rank #4 (Sell) further displays the unfavorable near-term earnings outlook. 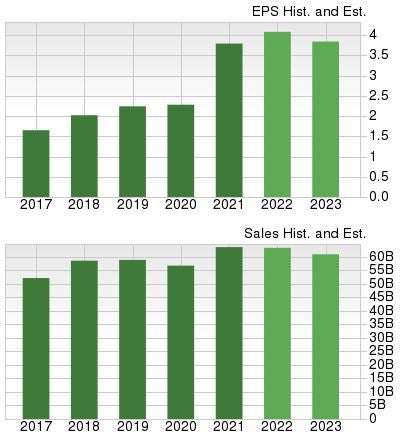 While shares are cheap, it’s important to remember that earnings are forecasted to take a sizable hit in its next fiscal year.

In a quick turn of events, Buffett has splashed into his cash in 2022, buying at an aggressive pace that’s generally not seen from the Oracle of Omaha.

Clearly, he sees value in areas.

Of the three, ATVI is undoubtedly the most exciting play from Buffett, and his OXY purchase reflects a further focus on the energy boom. With HPQ, it will be beneficial for investors to wait until favorable earnings estimate revisions start coming in.