Shares of Feneca Pharmaceuticals (FENC - Free Report) were up almost 12% on Sep 21, after the company announced that the FDA approved its only product candidate Pedmark (sodium thiosulfate injection).

The FDA has approved Pedmark to reduce the risk of hearing loss or ototoxicity associated with cisplatin in pediatric patients one month of age and older with localized, non-metastatic solid tumors.

Cisplatin is a critical chemotherapeutic agent used to treat pediatric malignancies. However, even though effective, this platinum-based therapy can harm children, causing permanent and irreversible bilateral hearing loss.

With Pedmark’s approval, physicians now have an approved treatment option to reduce the risk of cisplatin-induced hearing loss in pediatric patients.

Pedmark is currently the only treatment approved by the FDA for the indications above, an area of significant unmet medical need.

The regulatory clearance is expected to significantly solidify Feneca’s portfolio, thereby contributing to its revenue generation in the near term.

Feneca Pharmaceuticals’ shares have surged 94.1% in the year-to-date period against the industry’s decline of 25%. 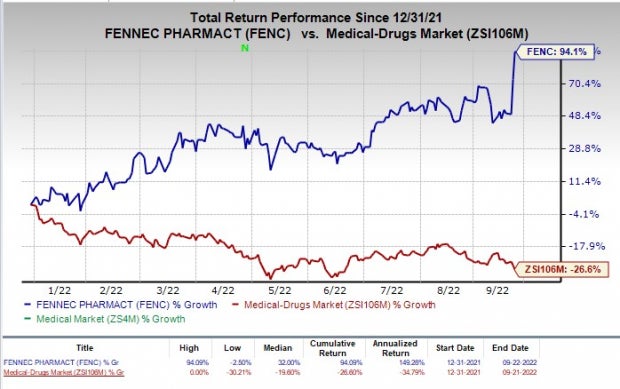 The FDA approval for Pedmark was based on the safety and efficacy data from two randomized phase III studies, SIOPEL 6 and COG ACCL0431, which evaluated Pedmark in pediatric patients undergoing treatment with cisplatin-based chemotherapy for their cancer. In the studies, Pedmark consistently and significantly reduced the incidence of hearing loss in the subjects.

Feneca completed the submission of its new drug application (NDA) for Pedmark in February 2020. However, in August 2020, the company received a complete response letter (CRL) against its NDA for Pedmark for intravenous administration to prevent ototoxicity associated with cisplatin chemotherapy in pediatric patients with localized, non-metastatic, solid tumors.

The CRL was issued to indicate that the regulatory body completed its pre-approval inspection and identified deficiencies with the facility of the drug product manufacturer, which required to be resolved before Pedmark was approved. No clinical safety or efficacy issues with Pedmark were identified and no further clinical data was required to be submitted.

Following the receipt of final minutes from a Type A NDA meeting with the FDA, Feneca resubmitted its NDA for Pedmark in May 2021, which was accepted by the FDA a month later in June.

However, the company received a second CRL in November 2021 after the FDA again identified manufacturing deficiencies.

The NDA for Pedmark was accepted by the FDA in April 2022. Pedmark received both Breakthrough Therapy and Fast Track Designation by the FDA.