McKessonCorporation (MCK - Free Report) is well-poised for growth, backed by strategic collaborations and strength in the distribution solutions segment. However, the company’s opioid-related litigation expenses pose a threat.

The company — with a market capitalization of $53.3 billion — is a health care services and information technology company. Its earnings are anticipated to improve 10.1% over the next five years. The company beat earnings estimates in three of the trailing four quarters and missed once, the average surprise being 13%. The company’s earnings yield of 7.1% also compares favorably with the industry’s 4.7%. 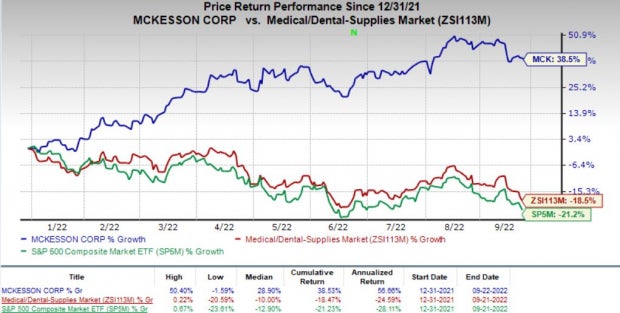 McKesson continues to actively pursue deals, divestitures and acquisitions to drive growth. In April 2022, the company completed the divestiture of its retail and distribution businesses in the United Kingdom to Aurelius. During the fiscal fourth quarter of 2022, the company completed the sale of its Austrian business to Quadrifolia management and the sale of its remaining share of its German joint venture to Walgreens Boots Alliance. The company is currently progressing with the divestiture of its European business. These divestitures will allow the company to focus on its key growth market — the United States.

In June, McKesson formed a joint venture with HCA Healthcare (HCA - Free Report) to create a fully integrated oncology research organization. Per the deal, McKesson and HCA Healthcare will integrate their respective research units — US Oncology Research (USOR) and Sarah Cannon Research Institute (SCRI). The newly created entity with the combined capabilities of SCRI and USOR is expected to boost clinical research, ramp up the development of drugs, lead to better data and analytics capabilities, and pave the way for a wider portfolio of clinical trials. The deal between McKesson and HCA Healthcare is likely to be completed later this year.

McKesson is a major player in the pharmaceutical and medical supplies distribution market. The Distribution Solutions segment caters to a wide range of customers and businesses and stands to benefit from increased generic utilization, inflation in generics, courtesy of several patent expirations in the next few years, and an aging population.

During the fiscal first quarter of 2023, McKesson’s growth was led by its strong performance across all segments, except the International segment, which was marred by unfavorable currency movement. The divestiture of McKesson’s Austrian business also hurt growth.

The company removed a major overhang during the fiscal first quarter by settling or signing a settlement agreement related to the opioid-related claims of all 50 states, as well as the District of Columbia and all eligible territories. These developments will close long-pending litigations that have been hurting the company’s goodwill and will also reduce legal expenses.

McKesson’s agreements with the U.S. government for COVID-19 vaccine distribution, kitting and storage programs and COVID-19 tests are an added benefit.

For fiscal 2023, the Zacks Consensus Estimate for revenues is pegged at $276.9 billion, indicating an improvement of 4.9% from the year-ago period’s reported figure. The same for adjusted earnings per share stands at $24.42, suggesting growth of 3.1% from the prior-year reported figure.

AMN Healthcare surpassed earnings estimates in each of the trailing four quarters, the average surprise being 15.7%. The company currently sports a Zacks Rank #1 (Strong Buy). You can see the complete list of today’s Zacks #1 Rank stocks here.

ShockWave Medical delivered an earnings surprise of 180.14%, on average, in the last four quarters.