On the news front, U.S. auto giant Ford (F - Free Report) issued a profit warning last week. It expects its third-quarter 2022 profits to take a hit in view of commodity cost headwinds stemming from exacerbated supply chain snarls and inflationary pressure. The persistent microchip shortage has been crippling the auto industry, as the auto part shortage is choking supplies, putting automakers on edge. Companies are battling with high raw material prices. This supply-chain chaos is expected to linger through 2022 and into 2023 as well.

Amid the persistent chip supply crunch, Japan-based auto giants Toyota and Honda are prompted to slash output targets. Toyota now intends to manufacture around 800,000 vehicles worldwide in October, indicating a fall from its prior production target of 900,000 vehicles. During the month, Toyota will be halting operations at seven domestic factories for around 12 days. Meanwhile, Honda also plans to cut production by around 40% at two Japanese plants in early October due to supply chain disruptions and logistical issues.

Ford announced that it anticipates its cost of auto parts to be $1 billion higher than expected in the third quarter of 2022. F envisions third-quarter adjusted EBIT to be $1.4-$1.7 billion, implying a fall from $3.7 billion recorded in the last reported quarter and $3 million earned in third-quarter 2021. The weak forecast is primarily attributed to $1 billion in added supplier costs for the three months ending September due to inflation and component shortages.

While Ford expects its profits to take a hit in the ongoing quarter, it has reaffirmed its full-year adjusted EBIT forecast of $11.5-$12.5 billion. Amid the scarcity of parts and components, Ford’s inventory of half-completed vehicles remains elevated. The company anticipates having 40,000-45,000 partially-built vehicles in inventory at the end of the third quarter. The vehicles are mainly high-margin trucks and SUVs, which Ford expects to get completed and sell by the end of 2022.

BorgWarner announced that it is set to acquire the Electric Vehicle Solution, Smart Grid and Smart Energy businesses of Hubei SSE. The transaction will have an enterprise value of nearly RMB 410 million, of which around RMB 267 million would be delivered at or soon after closing. It allows contingent payments of about RMB 143 million over a rough span of two years following the closing.The transaction is subject to customary closing conditions and SSE shareholder approval and is expected to close in the first quarter of 2023.

Based in Hubei province in China, SSE’s electrification business offers patented EV charging solutions to customers in China and more than 70 other countries. SSE has an excellent track record of delivering over 50,000 charging points and leading the engineering, procurement and construction of more than 250 charging station sites. BorgWarner is focused on expediting its fast-charging capabilities worldwide so that the recent development is an added advantage for the company. BorgWarner’s strength in Europe and North America will complement SSE’s electrification efforts in China.

General Motors and Hertz inked a deal, per which the former will sell nearly 175,000 of its EVs to the latter. The legacy US automaker will start supplying Chevrolet, Buick, GMC, Cadillac and even its commercial delivery unit, BrightDrop EVs, to the global vehicle rental giant from the first quarter of next year and over the next five years. These vehicles are expected to be followed by newer EV models built on GM’s Ultium battery technology, such as the Chevrolet Blazer, Chevrolet Equinox and vehicles from its other brands.

The extensive upcoming EV lineup by GM that includes everything from SUVs to pickup trucks and luxury vehicles will be made available to Hertz for rent. BrightDrop will make its Zevo 600 van available. Both GM and Hertz are of the view that the plan is the largest expansion drive of EVs among fleet customers because it includes a wide range of vehicle categories across varied price points, thereby making it more popular. General Motors, through the move, ensures that the EV market footprint widens and more customers can partake in the benefits of cleaner transport.

In another development, the Germany-based vehicle manufacturer, Quantron integrated Allison’s 130D e-Axle into its new fuel cell electric vehicle. It is a heavy-duty truck capable of tractor and chassis derivatives and made its debut at the IAA Transportation 2022, currently held in Hanover, Germany. ALSN also expanded its eGen Power family with the introduction of eGen Power 130S. The new product joins the impressive lineup of eGen Power e-axles, including the 100D (launched in 2020) and 130D and 100S (launched in 2021). 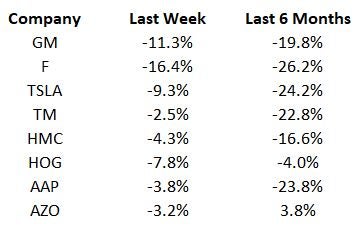 Stay tuned for any update on how automakers tackle the semiconductor shortage — compounded by the Russia-Ukraine war and COVID-19 restrictions in China — and make changes in business operations.