NIO Buys Stake in Greenwing to Secure Lithium for Batteries

NIO Inc. (NIO - Free Report) recently invested in Greenwing Resources, the Australia-based lithium company. The China-based EV maker has agreed to pay $12,000,000 to Greenwing to subscribe for the latter’s 21,818,182 shares at a deemed issue price of 55 cents per share (Placement).

Upon completion of the placement, NIO will own 12.16% of Greenwing and will enjoy the right to be nominated to the company's board of directors as long as it holds at least 10% of the shares.

Moreover, the automaker will obtain a call option to acquire between 20% and 40% of the issued capital of Andes Litio, which holds the rights over the San Jorge Lithium Project in Argentina.

Greenwing will issue a detailed scheme of the San Jorge Lithium Project to NIO, which can implement the option within a year, with the price expected to be between $40 million and $80 million.

At least 80% of the proceeds from the placement will fund Greenwing’s exploration efforts in the San Jorge lithium project, and the remaining amount will aid general working capital and costs of the proposed transaction. The funding will also align NIO as Greenwing’s potential joint venture and offtake partner.

The move by NIO seems to be a preparatory step to secure battery raw material supplies for the long run.

NIO aims to develop in-house batteries and is driving efforts to set up a battery swap network. Its battery swap technology — which is part of NIO’s BAAS strategy — is a game changer and provides an edge to the firm over peers. The company claims a battery pack can be replaced in its vehicles in about three minutes.

On the latest earnings call, NIO notified that so far, it deployed 1,094 swap stations. Encouragingly, it is expected to increase the total number of battery-swap stations to more than 1,300 by 2022-end. It aims to raise the count to 4,000 by the end of 2025.

By 2025, NIO will have a battery swap network covering nine vertical highways, nine horizontal highways and 19 urban areas in China. The company plans to have more than 4,000 battery swap stations worldwide by 2025, with 1,000 swap stations overseas. NIO also stated that it has completed more than 10 million battery swaps, with a daily average of above 30,000 swaps per day. The company intends to start manufacturing 800-volt battery packs designed in-house by 2024.

To strengthen its battery capabilities, it is likely that the company will need steady access to lithium.

Shares of NIO have lost 49.7% in the past year compared with its industry’s 38.5% decline. 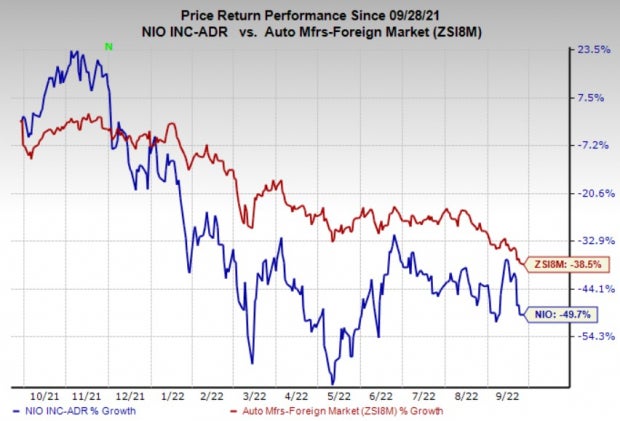