Sales of new U.S. single-family homes surged unexpectedly to the highest level since March this year in August. Encouragingly, home prices also declined. So, are these signaling a rebound in the U.S. housing market?

New home sales — a leading housing market indicator based on signed contracts, not closings — increased 28.8% to a seasonally adjusted annual rate of 685,000 units in August from July, according to the Commerce Department's report released Tuesday. This marks the highest level since March 2022. August’s sales pace was down 0.1% from the year-ago level. Last month’s figure also exceeded analysts’ expectation of 506,000 by 35.4%.

A Rebound for U.S. Housing?

The solid sales pace in August most likely depicts buyers’ willingness to capitalize on price cuts by builders as well as to purchase a home before there are further increases in borrowing costs.

The Fed's determination to curtail inflation through interest rate increases and quantitative tightening has started to show the desired effect of slowing down sales in markets across the country. In September 2022, the Fed approved its third consecutive interest rate rise of 0.75 percentage points and signaled that additional large increases are likely at the upcoming meetings to combat 40-year-high inflation.

Consequently, the highly interest-rate-sensitive housing sector in the United States has been significantly impacted by rising mortgage rates. The 30-year fixed mortgage rate averaged 6.29% last week, the highest since October 2008 compared with 6.02% in the prior week, according to data from mortgage finance agency Freddie Mac.In the year-ago period, the mortgage rate averaged 2.88%. With the rapid acceleration of mortgage rates, home-price appreciation began to cool off as housing demand is slowing down.

Overall, August data for U.S. housing remains mixed. Building permits — a key indicator in projecting future housing starts — to build new houses slumped in August. Building permits dropped 10% from July to the lowest level in two years. Nonetheless, housing starts unexpectedly rose by over 12% and were down 0.1% from a year ago, according to the U.S. Census Bureau.

This latest growth in new housing starts is encouraging for the housing market as inventory remains tight. The shortage in supply has played a key role in pushing home prices higher.

Then again, with the risk of further rise in borrowing costs — as Fed policymakers are considering more hikes to combat rapid inflation — the U.S. housing market will most likely face the consequences.

However, barring the readings for April and May 2020 (when HMI fell to 30 and 37, respectively), the September 2022 reading of 46 marks the lowest level since May 2014. High home prices, above 6% mortgage rates and back-to-back interest rate hikes make it difficult for entry-level and first-time buyers to indulge in such activity. 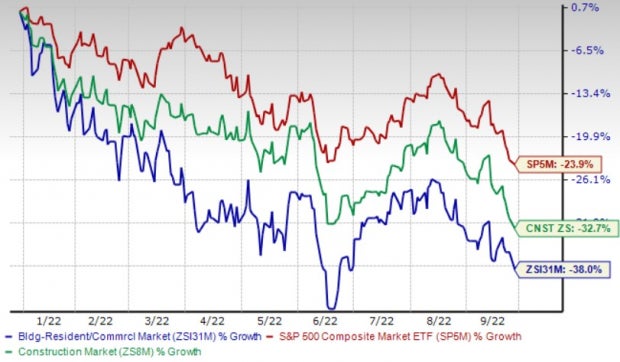 Sales have clearly been impacted by rising interest rates, but there remains a significant national shortage of housing, especially workforce housing, and demand remains strong as we navigate the rebalance between price and interest rates."

D.R. Horton, a Zacks Rank #4 (Sell) stock, is expected to witness a 41.4% year-over-year improvement in fiscal fourth-quarter earnings. Also, revenues are likely to gain 25.9% from the prior-year levels. However, DHI’s earnings per share are expected to register a 20.7% decline in fiscal 2023 after the expected 49.7% growth in fiscal 2022.

Toll Brothers, a Zacks Rank #5 (Strong Sell) company, is expected to witness a 30.8% year-over-year improvement in fiscal fourth-quarter earnings. Also, revenues are likely to gain 9.4% from the prior-year levels. However, TOL’s earnings per share are expected to register a 10.6% decline in fiscal 2023 after the expected 40.6% growth in fiscal 2022.