KemPharm (KMPH) Up On Positive Data From Sleep Disorder Study

KemPharm, Inc. (KMPH - Free Report) was up 7.27% on Sep 28 after the company announced top-line data from its phase I study evaluating serdexmethylphenidate (SDX) for cardiovascular safety.

KemPharm initiated the phase I study in the first quarter of 2022, evaluating SDX in comparison to Ritalin (racemic methylphenidate), a commonly prescribed CNS stimulant. In the data reported from this study, the company confirmed the relative cardiovascular effects and pharmacokinetics of serdexmethylphenidate (SDX) compared to Ritalin.

The initial data from phase I of the SDX study exhibited a potential for higher doses (80mg and 200mg) of SDX to be completely safe and well-tolerated in subjects compared to two doses of 40 mg of Ritalin. The tolerability of higher doses of SDX is expected to result in improved efficacy of the prodrug candidate, KP1077, in KemPharm’s portfolio.

The pharmacokinetic and pharmacodynamic data from the study confirmed that the doses of SDX released d-MPH as designed and in a manner that is expected to be well-suited for treating idiopathic hypersomnia (IH).

The company also intends to initiate a phase II study evaluating KP1077 in patients with narcolepsy in 2023.

Shares of KemPharm declined 28.8% in the year-to-date period, compared to the industry’s fall of 29.3%. 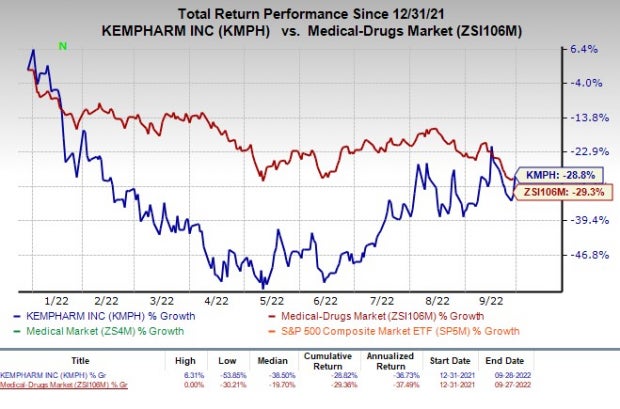 KemPharm is a biopharma company focused on developing treatments for CNS disorders and rare diseases.

Apart from KP1077, the company has yet another prodrug product candidate, KP879, being evaluated for treating stimulant use disorder (“SUD”).