Catalyst Pharma's (CPRX) sNDA for Firdapse Approved by the FDA

The company submitted an sNDA to the FDA for the use of Firdapse in treating pediatric LEMS patients in the first quarter of 2022.

LEMS is an ultra-rare disease autoimmune disorder characterized by muscle weakness of the limbs.

Post the sNDA approval by the FDA, Firdapse is now a treatment option in the United States for all LEMS patients beyond six years of age.

Shares of Catalyst have returned 87.6% against the industry’s decline of 28.4% in the year-to-date period. 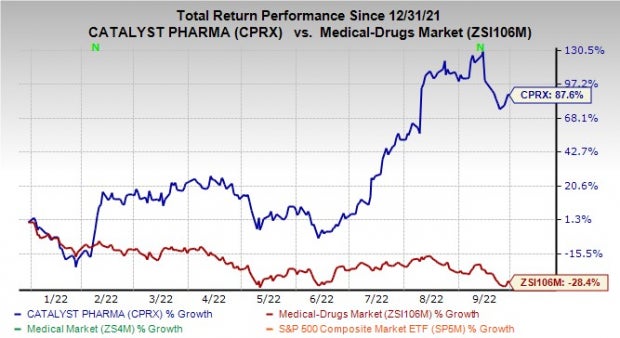 Additionally, Firdapse enjoys a Breakthrough Therapy status and an Orphan Drug status from the FDA for treating LEMS.

Catalyst entered into a license agreement with DyDo Pharma in December 2021, to develop and commercialize Firdapse in Japan. To obtain regulatory approval for Firdapse from the Japanese regulatory authorities, Dydo has already initiated a phase III study evaluating the drug for LEMS in Japan.

Investors are reminded that Catalyst reached a settlement with Jacobus Pharamceuticals and PANTHERx RARE LLC on its patent infringement litigation in July 2022. The settlement marked the end of an ongoing dispute between Catalyst and Jacobus since the latter’s drug Ruzurgi (amifampridine) was approved by the FDA in 2019 for treating LEMS in pediatric patients. This was contested by CPRX in its lawsuit, claiming that the regulatory body’s approval violated the orphan drug designation granted to Firdapse for LEMS.

According to the settlement conditions, Catalyst will write off all claims related to the litigation between the companies.

Catalyst also acquired Jacobus’ intellectual property rights, which include the rights to develop and commercialize Ruzurgi in the United States and Mexico. In return, Catalyst will make a cash payment to Jacobus. Jacobus will also be eligible to receive low single-digit royalties on U.S. net sales of amifampridine.

However, Catalyst’s overdependence on Firdapse and the lack of any promising candidate in its pipeline can constrain its growth.