ALS is a progressive, rare and life-threatening neuromuscular disease characterized by the loss of motor neurons in the brain, brainstem, and spinal cord that leads to progressive muscle weakness and difficulties in speaking, swallowing, and breathing. Per the company, the disease affects approximately 30,000 people in the United States. Presently, there are no approved treatment options and no cure for ALS.

The HEALY ALS study is an adaptive study evaluating multiple investigational treatments simultaneously for the easy and accelerated development of treatment options for ALS patients.

Biohaven evaluated verdiperstat in the study participants with ALS for a period of 24 weeks. The candidate did not exhibit any statistically significant difference in the prescribed primary efficacy outcome, disease progression measured by the ALS Functional Rating Scale-Revised or survival in patients who received the drug compared with a placebo. The candidate also did not exhibit any improvements in the key secondary efficacy measures of the study.

The initial data from the safety analysis of the study was in line with the candidate’s previous studies.

The company continues to conduct additional analyses of the candidate and expects to report results from the complete results at an upcoming scientific meeting.

Shares of Biohaven have returned 9.9% in the year-to-date period against the industry’s decline of 24.5%. 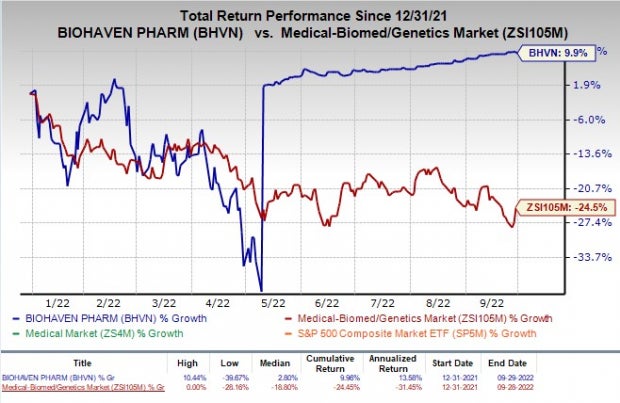 Biohaven is a commercial-stage biopharma company focused on developing and commercializing therapies for rare neurological and neuropsychiatric diseases.

Amylyx Pharmaceuticals recently announced that the FDA approved its pipeline candidate, Relyvrio (sodium phenylbutyrate and taurursodiol), for treating ALS in adults. In a randomized placebo-controlled study, Relyvrio significantly slowed down the loss of physical function in adult ALS patients.

Ionis is also developing several candidates for different forms of ALS, including ION363 for ALS, with mutations in the fused in sarcoma gene, or FUS (FUS-ALS), and tofersen, in partnership with Biogen, for superoxide dismutase 1 amyotrophic lateral sclerosis (SOD1-ALS)

In July, the FDA accepted the new drug application (NDA) for Ionis/Biogen’s tofersen in the treatment of SOD1-ALS. The application has also been granted priority review and a decision is expected by Jan. 25, 2023.

Investors should note that Biohaven entered into a definitive contract with Pfizer (PFE - Free Report) in May 2022, wherein the latter will acquire the former for an all-cash transaction of $148.50 per share or a total equity value of $11.6 million.

Per the terms of the transaction, Pfizer will acquire Biohaven’s calcitonin gene-related peptide (CGRP) pipeline. With regard to the non-CGRP pipeline, all existing shareholders of Biohaven (including Pfizer) will receive half a share of a new publicly traded company that will retain the company’s non-CGRP programs for every one common share of Biohaven. The new company will continue to operate under Biohaven’s name. The transaction is expected to be complete by early 2023.