Tesla cites supply chain snafus and logistics challenges as the primary causes for the delivery miss. As stated in the company’s press release “As our production volumes continue to grow, it is becoming increasingly challenging to secure vehicle transportation capacity and at a reasonable cost during these peak logistics weeks.”

NIO announced that it delivered 31,607 vehicles in the third quarter of 2022, marking an increase of 26% sequentially and 29.3% on a yearly basis. Cumulative deliveries of 249,504 vehicles were recorded as of Sep 30, 2022. In September, NIO delivered 10,878 vehicles. The company commenced deliveries of ET5 in late September.

In another development, NIO invested in Greenwing Resources, an Australia-based lithium company. The China-based EV maker has agreed to pay $12,000,000 to Greenwing to subscribe for the latter’s 21,818,182 shares at a deemed issue price of 55 cents per share (Placement). Upon completion of the placement, NIO will own 12.16% of Greenwing. The automaker will obtain a call option to acquire between 20% and 40% of the issued capital of Andes Litio, which holds the rights over the San Jorge Lithium Project in Argentina. Greenwing will issue a detailed scheme of the San Jorge Lithium Project to NIO, which can implement the option within a year, with the price expected to be between $40 million and $80 million. The move by NIO seems to be a preparatory step to secure battery raw material supplies for the long run.

Notably, G9 SUV is the company’s fourth production model and was launched on Sep 21. Mass deliveries of the same are on track to start in late October. In September, XPeng rolled out City NGP (Navigation Guided Pilot), China’s most advanced ADAS. It also launched the first batch of 480 kW S4 supercharging stations in five cities— Wuhan, Beijing Shanghai, Shenzhen and Guangzhou. XPeng is actively focused on the expansion of a nationwide fast-charging network.  It targets to bring around 50 S4 supercharging stations into operation by 2022 end.

4. Li Auto saw deliveries of 11,531 Li ONEs in September 2022, up 62.5% year over year. With this, the company’s second-quarter deliveries were 26,524, representing a 5.6% year-over-year increase. The cumulative deliveries of Li ONE totaled 211,015 since the vehicle made its debut in 2019. The Li L9, the flagship smart SUV for families, unveiled in June saw deliveries of over 10,000 in September. The vehicle is a six-seat, full-size flagship SUV, offering ample space and comfort for family users.

In other news, Nikola is recalling all the 93 battery-electric Nikola Tre Class 8 trucks it has manufactured to date. It has decided on the recall because there is an improper installation of the seat belt shoulder anchors that could compromise protection in the event of a collision. The assembly stands a chance of becoming detached under the weight of a passenger. The faulty seat belt anchor assembly design may stop a fastening screw from engaging correctly with a nut, thereby increasing the likelihood of weaker protection.Nikola will replace the faulty components on all vehicles free of charge. Customers and dealers will be notified about the glitch through mailed letters between Oct 1 and Nov 1. 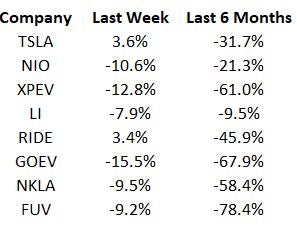