Barring one-time items, adjusted loss was $2.04 per share for the quarter. The figure was wider than the Zacks Consensus Estimate of a loss of $2.02.

Net sales fell around 33% year over year to $493.6 million and missed the consensus mark of $527.4 million. The company witnessed lower sales across its major segments in the quarter.

Company-wide gross margin rate (as adjusted) was 3.5% compared with 17.4% in the year-ago quarter. The decline in gross margin is attributable to unfavorable fixed cost leverage related to volume, increased commodity costs and unfavorable distribution costs. These were partly offset by price increases and favorable segment mix.

Loss from continuing operations (as reported) or full-year fiscal 2022 was $7.88 per share, compared with a profit of $9.03 per share a year ago. Revenues were $3.92 billion for the fiscal, down around 20% year over year.

The company anticipates low single-digit percentage growth on a year-over-year basis in adjusted operating income in fiscal 2023. It also sees mid-single digit percentage year over year growth in adjusted EBITDA for the fiscal. SMG also expects free cash flow of $1 billion over the next two years.

Scotts Miracle-Gro, in August 2022, announced “Project Springboard”, aimed at boosting margins, improving cash flow and strengthening the balance sheet to provide a strong foundation for sustainable shareholder value creation. The first phase of this initiative achieved $100 million of annualized savings split between fiscal 2022 and fiscal 2023. The second phase of this initiative (Project Springboard 2.0) is expected to achieve an additional $85 million of cost reductions to be realized in fiscal 2023 and fiscal 2024.

Shares of Scotts Miracle-Gro have declined 67.5% in the past year against a 19.4% rise of the industry. 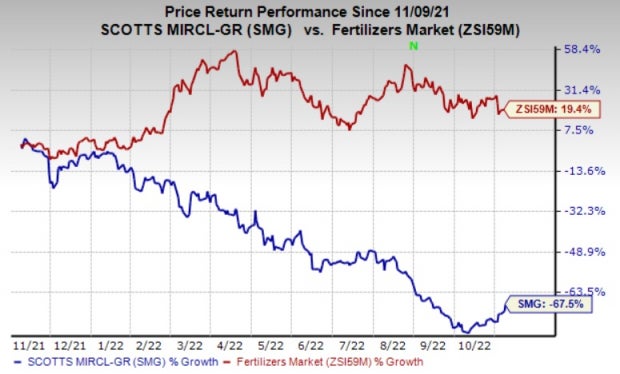 Albemarle, currently carrying a Zacks Rank #2 (Buy), has a projected earnings growth rate of 430.9% for the current year. The Zacks Consensus Estimate for ALB's current-year earnings has been revised 5.8% upward in the past 60 days. You can see the complete list of today’s Zacks #1 Rank (Strong Buy) stocks here.

Albemarle’s earnings beat the Zacks Consensus Estimate in each of the last four quarters. It has a trailing four-quarter earnings surprise of roughly 24.2%, on average. ALB has gained around 10% in a year.

Commercial Metals currently carries a Zacks Rank #2. The Zacks Consensus Estimate for CMC's current-year earnings has been revised 3.8% upward in the past 60 days.

Commercial Metals’ earnings beat the Zacks Consensus Estimate in each of the last four quarters. It has a trailing four-quarter earnings surprise of roughly 19.7%, on average. CMC has gained around 34% in a year.

Reliance Steel, currently carrying a Zacks Rank #2, has a projected earnings growth rate of 29.7% for the current year. The Zacks Consensus Estimate for RS's current-year earnings has been revised 0.1% upward in the past 60 days.

Reliance Steel’s earnings beat the Zacks Consensus Estimate in each of the last four quarters. It has a trailing four-quarter earnings surprise of roughly 13.6%, on average. RS has gained around 25% in a year.