The Zacks Computer and Technology sector has been strong over the last month, up 11% and marginally outperforming the S&P 500.

A company residing in the space that many have become familiar with, Applied Materials (AMAT - Free Report) , is on deck to unveil quarterly earnings on November 17th, after the market close.

Applied Materials is one of the world’s largest equipment suppliers for the fabrication of semiconductors, flat panel liquid crystal displays (LCDs), and solar photovoltaic (PV) cells and modules.

Currently, the company carries a Zacks Rank #4 (Sell) paired with an overall VGM Score of a C.

How does everything else stack up? Let’s take a closer look.

AMAT shares have undergone adverse price action year-to-date, down nearly 30% and underperforming the S&P 500 by a wide margin. 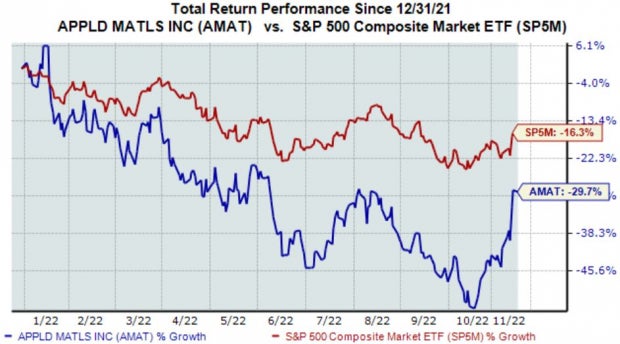 However, over the last month, AMAT shares have skyrocketed for a nearly 50% gain, leaving the S&P 500’s performance in the dust. 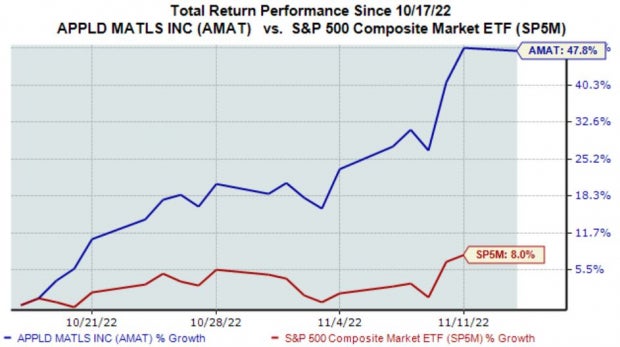 Clearly, the favorable near-term price action shows that buyers have stepped up significantly.

AMAT shares currently trade at a 16.4X forward earnings multiple, above the 14.9X five-year median but representing a 28% discount relative to the Zacks Computer and Technology sector average of 22.7X.

The company carries a Value Style Score of a B.

Analysts have been bearish in their earnings outlook over the last several months, with nine downward earnings estimate revisions hitting the tape. The Zacks Consensus EPS Estimate of $1.73 suggests a Y/Y earnings decline of roughly 10%.

However, the company’s top-line appears to be in better health; the Zacks Consensus Sales Estimate of $6.4 billion indicates an improvement of roughly 4.5% from year-ago quarterly revenue of $6.1 billion.

Top-line results tell the same story; AMAT has exceeded sales expectations in seven of its last ten releases. Below is a chart illustrating the company’s revenue on a quarterly basis.

AMAT shares reside deep in the red year-to-date but have soared over the last month, indicating that buyers have finally stepped up to the plate.

The company’s forward earnings multiple sits above its five-year median by a fair margin but below the Zacks Computer and Technology sector average.

Analysts have been bearish in their earnings outlook, with estimates suggesting a Y/Y decline in earnings but an uptick in revenue, reflecting rising costs eating into margins.

Heading into the print, Applied Materials, Inc. (AMAT - Free Report) carries a Zacks Rank #4 (Sell) with an overall VGM Score of a C.

Breaking Down Walmart (WMT) Vs. Target (TGT) Stock Before Earnings