Kinross Gold Corporation (KGC - Free Report) reported profits of $65.9 million or 5 cents per share in third-quarter 2022 compared with a loss of $72.9 million or 6 cents reported in the year-ago quarter. Earnings per share missed the Zacks Consensus Estimate of 6 cents.

The company produced 529,155 gold equivalent ounces from continuing operations in the reported quarter, up 61% year over year. The upside was due to higher production at Tasiast, Paracatu and La Coipa.

Average realized gold prices were $1,732 per ounce in the quarter, down around 3% from the year-ago quarter’s figure.

Margin per gold equivalent ounce sold was $791 in the quarter, down from the prior quarter’s level of $901.

Adjusted operating cash flow increased around 84% year over year in the third quarter to $259.4 million.

For 2022, Kinross expects production to be around 2 million gold equivalent ounces factoring in slower-than-expected ramp-up at La Coipa and challenges related to commissioning the Tasiast 21k project.

The company expects to be modestly above its revised production cost of sales of roughly $900 per gold equivalent ounce for the year and in line with its all-in sustaining cost per ounce guidance of around $1,240.

Capital expenditures are predicted at around $750 million for this year.

Shares of Kinross have declined 40.1% in the past year compared with an 11.1% fall of the industry. 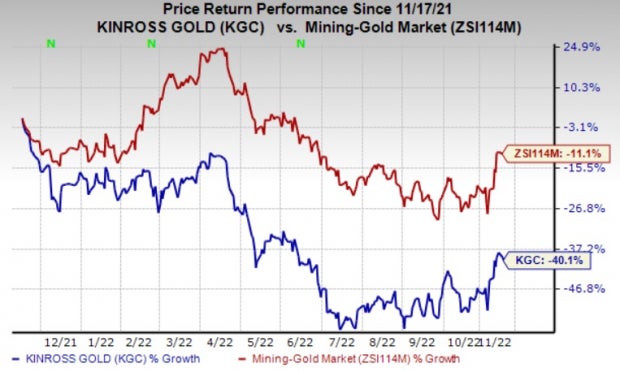 Sociedad has a projected earnings growth rate of 538.1% for the current year. The Zacks Consensus Estimate for SQM’s current-year earnings has been revised 1.2% upward in the past 60 days.

Sociedad has a trailing four-quarter earnings surprise of roughly 27.2%. SQM has rallied roughly 60% in a year. The company currently carries a Zacks Rank #1 (Strong Buy). You can see the complete list of today’s Zacks #1 Rank stocks here.

Commercial Metals currently carries a Zacks Rank #1. The Zacks Consensus Estimate for CMC's current-year earnings has been revised 3.8% upward in the past 60 days.

Commercial Metals’ earnings beat the Zacks Consensus Estimate in each of the last four quarters. It has a trailing four-quarter earnings surprise of roughly 19.7%, on average. CMC has gained around 38% in a year.

Reliance Steel, currently carrying a Zacks Rank #2 (Buy), has a projected earnings growth rate of 29.7% for the current year. The Zacks Consensus Estimate for RS's current-year earnings has been revised 0.1% upward in the past 60 days.

Reliance Steel’s earnings beat the Zacks Consensus Estimate in each of the last four quarters. It has a trailing four-quarter earnings surprise of roughly 13.6%, on average. RS has gained around 28% in a year.