The expansion endeavor will enable CenterWell to further penetrate the geographies where it already operates, for instance, the seven states comprising Louisiana, Texas, Nevada, North Carolina, South Carolina, Kentucky and Tennessee. With the senior-focused primary centers, Humana will also extend its footprint to three new states, namely Indiana, Mississippi and Virginia in 2023. HUM hopes to make the above-mentioned centers operational by the end of next year.

The centers’ well-meaning decision to provide primary care to the aging U.S. population seems a time opportune move. Per research firm Statista, US citizens aged 65 years or older formed around 16.9% of the country’s total population in 2020. However, the same age-bracket is likely to account for 22% of the total populace by 2050.

Since its launch in 2021, the CenterWell brand has achieved success with a holistic care model, while its centers are equipped with able physicians and integrated care teams, well-trained to cater to the seniors. The care teams devise personalized care plans to address patients’ social, behavioral and financial needs. Apart from delivering better health outcomes, the pursuit of a comprehensive care model controls emergency room visits and hospital admissions, thus lowering the burden of frequent hospitalizations on the healthcare system and offering physicians great relief.

This Humana brand remains quite active in opening successive senior-focused primary centers across several U.S. states. To name a few, announcements were made this year to serve Atlanta, Arizona and South Louisiana through the above-mentioned centers of CenterWell.

The CenterWell brand, together with Conviva, is part of Humana’s Primary Care Organization (PCO), which boasts being one of the largest senior-focused primary care providers in the United States. This, in turn, widened PCO’s reach with more than 220 centers across 11 states, serving roughly 240,000 Medicare Advantage or Original Medicare patients. PCO’s plans to open 30-50 centers annually through 2025 remain in place.

Increasing the number of senior-focused primary care centers is likely to boost Humana’s Medicare business. Several contract wins and renewals led to membership growth and the expansion of HUM’s nationwide footprint. For 2022, management expects individual Medicare Advantage membership to grow by around 150,000-200,000 heads.

Shares of Humana have gained 16% in a year compared with the industry’s rally of 11.8%. 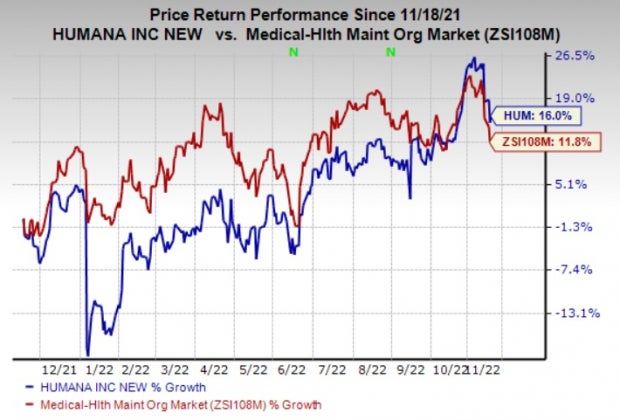 Medpace’s earnings outpaced estimates in each of the trailing four quarters, the average being 22.04%. The Zacks Consensus Estimate for MEDP’s 2022 earnings indicates a rise of 44.9%, while the same for revenues suggests an improvement of 27.1% from the corresponding year-ago reported figures. The consensus mark for MEDP’s 2022 earnings has moved 13.1% north in the past 30 days.

The bottom line of AMN Healthcare beat estimates in each of the trailing four quarters, the average being 10.96%. The Zacks Consensus Estimate for AMN’s 2022 earnings indicates a rise of 42.3%, while the same for revenues suggests an improvement of 29.7% from the corresponding year-ago reported figures. The consensus mark for AMN’s 2022 earnings has moved 1.4% north in the past 30 days.

Genmab’s earnings outpaced estimates in each of the trailing four quarters, the average being 66.61%. The Zacks Consensus Estimate for GMAB’s 2022 earnings indicates a rise of 76.4%, while the same for revenues suggests an improvement of 38.2% from the corresponding year-ago reported figures. The consensus mark for GMAB’s 2022 earnings has moved 18.7% north in the past seven days.

Shares of AMN Healthcare and Genmab have gained 1% and 2.7%, respectively, in a year. However, the Medpace stock has lost 0.5% in the same time frame.

Here's How Best Buy (BBY) Is Poised Ahead of Q3 Earnings