However, shares of Monopar Therapeutics have declined 7.8% in the year-to-date period compared with the industry’s fall of 17.8% 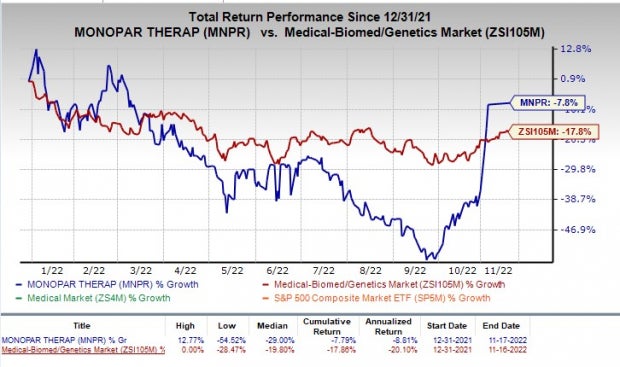 Camsirubicin is the molecular modification of doxorubicin, one of the most widely-used cancer drugs worldwide. Camsirubiocin is designed to reduce cardiac damage when used in higher doses for a longer period of time, unlike doxorubicin.

The phase 1b study enrolled 11 patients who exhibited stable disease (SD) at 12 weeks. However, one of the subjects who met the criteria for SD at the first CT scan at six weeks died due to COVID-19 and could not be evaluated at the 12-week scan.

The ASTS subtype patients who achieved SD on camsirubicin are expected to have a similar response on doxorubicin.

No adverse events related to the treatment were observed in the subjects.

In August 2021, Monopar received FDA clearance to proceed with the phase Ib dose-escalation study evaluating camsirubicin in patients with ASTS. The phase Ib open-label dose escalation study has been designed to determine the maximum tolerable dose of camsirubiocin in ASTS patients.

Earlier this year, Monopar announced that the first dose level of the candidate has been completed in November 2021.  The starting dose of camsirubiocin in the study was 256 mg/m2.

With a positive recommendation from the safety review committee, Monopar progressed the study to the next higher dose level. The candidate exhibited early signs of clinical benefit across the first two dose levels. That dose level was successfully cleared, as was the third dose level. The company is presently dosing patients at the fourth dose level of 520mg/m2.

Earnings of Immunocore beat estimates in three of the trailing four quarters, while missing the same on the remaining occasion. The average earnings surprise for IMCR is 68.34%.

AVEO Pharmaceuticals loss per share estimates for 2022 have narrowed down from 94 cents to 68 cents over the past 30 days. The earnings estimate for 2023 remained steady at improved from 41 cents to 52 cents in the same time frame.

Earnings of AVEO beat estimates in three of the trailing four quarters, while missing the same in the reaming occasion. The average earnings surprise for AVEO is 19.87%.

Earnings of Eton missed estimates in three of the trailing four quarters, while beating the same on the remaining occasion. The average earnings surprise for ETON is 115.63%.