The Zacks Computer and Technology sector has sailed through rough waters in 2022 as the Fed pivoted to a hawkish nature, down more than 30%.

A widely-known company in the realm, Agilent Technologies (A - Free Report) , is on deck to unveil Q4 earnings on November 21st, after the market close.

Agilent is an original equipment manufacturer (OEM) of a broad-based portfolio of test and measurement products serving multiple end markets.

Currently, the company carries a Zacks Rank #2 (Buy) paired with an overall VGM Score of a D.

How else does Agilent stack up heading into its print? Let’s take a closer look.

Year-to-date, Agilent shares have outperformed the S&P 500 by a notable margin, down roughly 8% vs. the general market’s 17% decline. 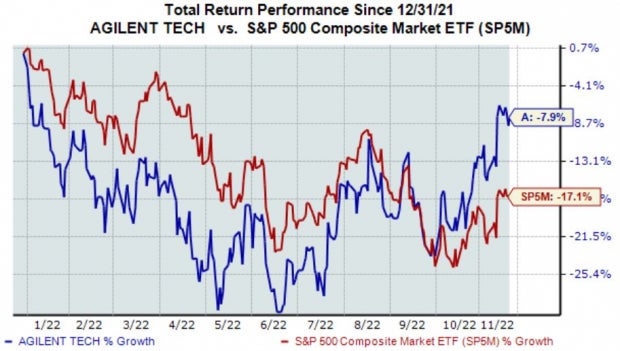 Over the last month, A shares have continued on their market-beating trajectory, tacking on a strong 13% in value and again outperforming the S&P 500. 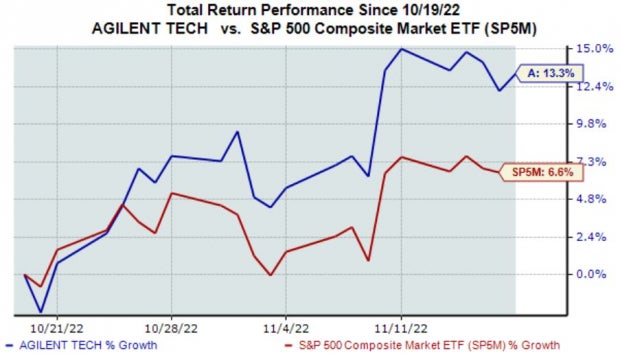 The favorable price action of Agilent shares indicates that buyers have defended the stock much higher than we can say for the majority of stocks in 2022.

Agilent shares currently trade at a 26.4X forward earnings multiple, nearly precisely in line with its 26.1X five-year median and well below highs of 41.6X in 2021.

Agilent carries a Style Score of a D for Value.

One analyst has lowered their earnings outlook for the quarter to be reported over the last several months. Still, the Zacks Consensus EPS Estimate of $1.39 indicates a Y/Y uptick in earnings of roughly 15%.

The company’s top-line appears to be in solid health as well; the Zacks Consensus Sales estimate of $1.8 billion suggests an improvement of more than 6% Y/Y.

Agilent has been the definition of consistency within its bottom-line results, exceeding earnings estimates in ten consecutive quarters. Just in its latest print, the company registered a sizable 11.7% EPS beat.

Revenue results have also been overwhelmingly positive; A has exceeded sales expectations in nine of its last ten quarters. Below is a chart illustrating the company’s revenue on a quarterly basis.

Agilent shares have outperformed the general market across several timeframes in 2022, indicating that buyers have defended the stock.

The company’s forward earnings multiple currently sits nearly at its five-year median and well below highs of 2021.

One analyst has lowered their earnings outlook, with estimates indicating Y/Y increases in both revenue and earnings.

Further, A has consistently exceeded quarterly estimates, with a large EPS beat coming in its latest print.

Heading into the release, Agilent Technologies (A - Free Report) carries a Zacks Rank #2 (Buy) paired with an overall VGM Score of a D.