Post subtracting underwriters’ discounts and anticipated offering expenses, HUM estimates to receive proceeds of around $1,232 million from the public offering of the senior notes.

Subsequently, Humana is expected to utilize the proceeds for paying back aggregate principal amounts of senior notes worth $600 million and $400 million, respectively. The two tranches of notes bear interest rates of 3.150% and 2.900%, respectively, and are scheduled to mature this year only.

After servicing the above-mentioned debts, the remaining amount can be utilized by Humana for addressing general corporate purposes that may comprise the repayment of borrowings as part of its commercial paper program. The program had an outstanding amount of $303 million as of Sep 30, 2022.

Sufficient cash reserves and a solid cash-generation ability can provide some respite to Humana from a heavy debt load. Cash and cash equivalents at the third-quarter end increased four-fold from the level at 2021 end. Also, net cash provided by operating activities increased more than four-fold in the first nine months of 2022 from the prior-year comparable period’s level.

HUM had resorted to a similar process of debt repayment in March 2022.

Despite a solid financial position, an increasing debt burden can limit a company’s capacity to meet its current obligations soon. Humana is no exception to this trend. Its times interest earned ratio of 10.3X at the third-quarter end was lower than the industry’s figure of 12.8X. Therefore, HUM must strive hard to service its debts continually, or else the creditworthiness of its stock could be dented. 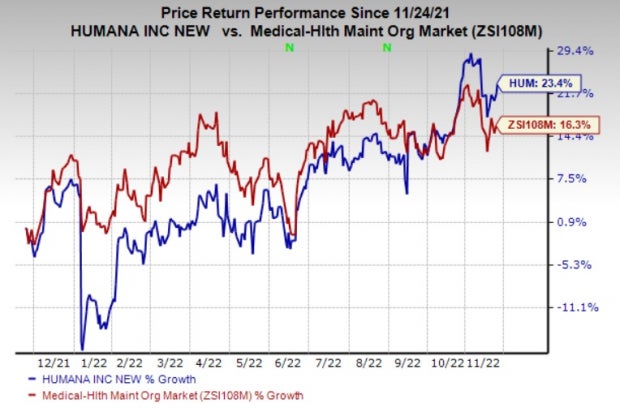 The bottom line of Medpace surpassed estimates in each of the last four quarters, the average beat being 22.04%. The Zacks Consensus Estimate for MEDP’s 2022 earnings suggests an improvement of 44.9%, while the same for revenues indicates growth of 27.1% from the respective year-ago reported figures. The consensus mark for MEDP’s 2022 earnings has moved 13.1% north in the past 30 days.

Merit Medical Systems’ earnings outpaced estimates in each of the trailing four quarters, the average surprise being 25.35%. The Zacks Consensus Estimate for MMSI’s 2022 earnings suggests an improvement of 8.4% from the year-ago reported figure. The same for revenues suggests growth of 6.8% from the prior-year tally. The consensus mark for MMSI’s 2022 earnings has moved 4% north in the past 30 days.

The bottom line of United Therapeutics outpaced estimates in two of the last four quarters and missed the mark twice, the average being 7.24%. The Zacks Consensus Estimate for UTHR’s 2022 earnings suggests an improvement of 64.9% from the year-ago reported figure. The same for revenues suggests growth of 14.9% from the year-ago tally. The consensus mark for UTHR’s 2022 earnings has moved 12.8% north in the past 30 days.

Shares of Medpace, Merit Medical Systems and United Therapeutics have gained 2.1%, 4.3% and 33.3%, respectively, in a year.

Here's Why Investors Should Retain Graco (GGG) Stock for Now