Per the deal, ConocoPhillips would purchase 2 million tons (Mt) of LNG per year for 15 years, starting in 2026. COP will deliver it to an onshore receiving terminal, which is currently under construction in Brunsbuttel, northern Germany.

The LNG volumes will be obtained from Qatar’s North Field East (“NFE”) and North Field South (“NFS”) projects. Once online, the projects are expected to boost Qatar’s LNG export capacity to 126 Mt from the current 77 Mt. ConocoPhillips holds 3.125% and 6.25% interests in the NFE and NFS projects, respectively.

The agreements came as Europe looks to replace Russia gas supplies after sanctions were imposed against Russia. Germany, which is Europe’s biggest importer of Russia gas, has not received any LNG since August. LNG demand has become robust since Russia gas constitutes 40% of the continent’s imports.

Germany is manufacturing five LNG terminals as part of plans to replace Russia supplies, with the first expected to become operational shortly. Most of Germany’s current gas supply comes from or through Norway, the Netherlands and Belgium.

The latest agreements will provide an attractive LNG offtake solution and reliable sources of LNG supplies into Europe.

Shares of COP have outperformed the industry in the past six months. The stock has gained 10.5% against the industry’s 10.5% decline. 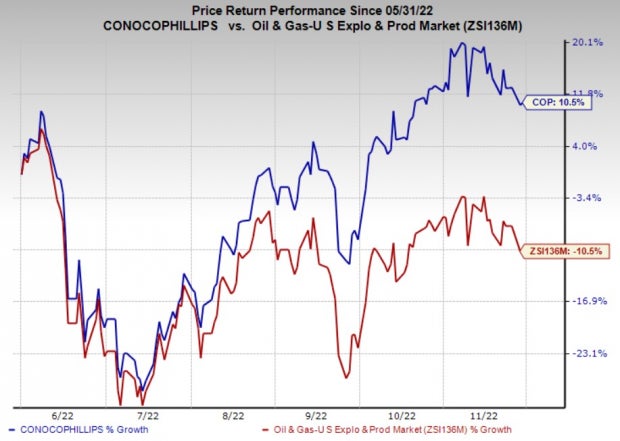 Investors interested in the energy sector might look at the following stocks that presently carry a Zacks Rank #2 (Buy). You can see the complete list of today’s Zacks #1 Rank (Strong Buy) stocks here.

Petrobras (PBR - Free Report) is one of the largest publicly-traded Latin American oil companies, which dominates Brazil’s oil and gas sector. PBR’s third-quarter 2022 earnings per ADS of $1.35 beat the Zacks Consensus Estimate of $1.32.

Equinor ASA (EQNR - Free Report) is one of the premier integrated energy companies in the world. EQNR’s third-quarter 2022 adjusted earnings per share of $2.12 beat the Zacks Consensus Estimate of $1.78.

Equinor is expected to see an earnings surge of 133.8% in 2022. For the third of 2022, Equinor’s board increased its extraordinary cash dividend to 70 cents per share from 50 cents per share for the previous quarter. This reflects the firm’s strong commitment to returning capital to shareholders.