Driven by a strong inventory position and favorable vendor relationships, this Zacks Rank #3 (Hold) company retained its fiscal 2023 view. Also, HIBB highlighted that its new stores have been performing well and it is on track to extend its market reach.

Shares of this company have lost 1.4% in the past three months against the industry's 4.9% growth. 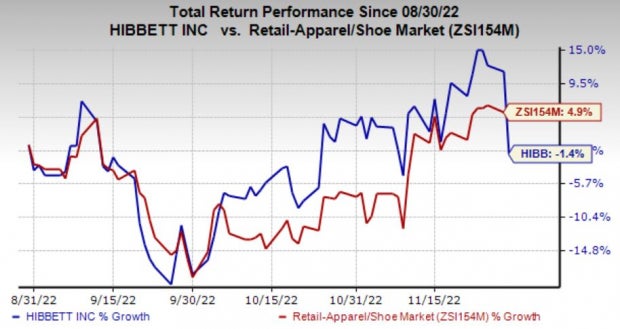 Hibbett's adjusted earnings of $1.94 per share rose 16% from $1.68 reported in the prior-year quarter. However, the figure lagged the Zacks Consensus Estimate of $2.56.

Net sales advanced 13.5% year over year to $433.2 million for the quarter under review and jumped 57% on a three-year basis. However, the figure missed the Zacks Consensus Estimate of $438 million.

The gross profit increased 7.2% year over year to $148.7 million for the reported quarter. Meanwhile, the gross margin contracted 200 basis points (bps) to 34.3% due to lower average product margins, somewhat offset by reduced logistics costs. Operating income was $34.2 million, up 2.4% year over year, while the operating margin contracted 90 bps to 7.9% for the reported quarter.

Store operating, selling and administrative (SG&A) expenses, as a percentage of sales, contracted nearly 130 bps to 23.9%, driven by higher sales.

Hibbett ended the quarter with $25.1 million in cash and cash equivalents and $73.3 million available under its unsecured credit facilities. Total stockholders' investment, as of Oct 29, was $337.8 million.

In the fiscal third quarter, Hibbett repurchased 160,637 shares worth $9 million. Management paid out a quarterly dividend of 25 cents.

Capital expenditure was $17 million in the said quarter, stemming from store initiatives, including store openings, relocations, expansions, remodels and technology upgrades. For fiscal 2023, capital expenditure is expected to be $60-$70 million for investment in new stores, remodels, technology advancement and infrastructure.

The gross margin is envisioned to contract 290-310 basis points year over year, with the metric likely to be 35.1-35.3% due to lower product margins, higher freight and transportation costs, as well as higher store occupancy costs and e-commerce sales. SG&A, as a percent of net sales, is estimated to rise 10-20 bps year over year due to wage inflation, higher costs related to growth in e-commerce, a larger store count and back-office infrastructure investments in fiscal 2022. SG&A, as a percentage of sales, is predicted to be 22.7-22.8%, which is likely to be below the pre-pandemic levels.

The operating margin is predicted to be in the low-double-digit range and is likely to remain above the pre-pandemic level. Earnings are anticipated to be $9.75-$10.50 per share, whereas the company posted $11.19 last year. Also, the effective tax rate is expected to be 24.5%.

Wingstop currently sports a Zacks Rank #1 (Strong Buy). WING has a long-term earnings growth rate of 11%. Shares of WING have declined 9.2% in the past year. You can see the complete list of today’s Zacks #1 Rank stocks here.

The Zacks Consensus Estimate for Wingstop’s 2023 sales and EPS suggests growth of 18.1% and 16.4%, respectively, from the year-ago period’s reported levels.

The Zacks Consensus Estimate for Dollar General’s current financial-year revenues and EPS suggests growth of 10.8% and 13.8%, respectively, from the year-ago reported figures. DG has a trailing four-quarter earnings surprise of 2.2%, on average.

The Zacks Consensus Estimate for Chipotle Mexican Grill’s current financial-year revenues and EPS suggests growth of 15.2% and 30.8%, respectively, from the year-ago reported figures. CMG has a trailing four-quarter earnings surprise of 4.1%, on average.

Signet (SIG) Queued Up for Q3 Earnings: What's in the Cards?