The bullish reaction to Jay Powell’s speech sent the S&P 500 above its 200-day moving average for the first time since April. Wall Street bulls held their ground on Thursday and Friday, even though some selling returned following a strong November jobs report.

Traders currently put an 80% chance on the Fed lifting its core rate by 0.50% in December to between 4.25% to 4.50%, based on the CME FedWatch Tool. Two-year U.S. Treasury yields, which largely reflect where Wall Street expects the Fed Funds rate to end up, hovered at 4.27% on Friday afternoon vs. 4.47% on Tuesday and 4.74% in early November.

Despite the unknowns, Wall Street is telling investors they don’t see the Fed having to do too much more after their December hike. The market also has a much clearer picture of the fading earnings outlook for FY23. Zacks data shows that total S&P 500 earnings are expected to be up +4.8% in 2022 and +2.8% in 2023.

These figures, though not adjusted for inflation, hardly signify the U.S. economy is headed for a major economic downturn. Wall Street is often well ahead of Mainstreet. Therefore, it is not a huge surprise that stocks rebounded in a big way in the first two months of the fourth quarter.

Investors looking to buy stocks to start December have plenty of great options. Here are three highly-ranked Zacks stocks that have crushed the market in 2022 and are poised to post strong growth next year as well.

Halliburton is an oil field services standout that works throughout the entire lifecycle of a project. Halliburton’s products and offerings help oil and gas companies with everything from exploration and well construction all the way to abandonment activities. Halliburton, like many others in the wider oil and energy sector, benefited from soaring prices in 2022.

The Russian invasion of Ukraine has hampered global oil and gas supplies, forcing many countries and companies to reevaluate the status quo. More exploration and drilling projects are underway in the newfound race toward greater energy independence. Plus, it is clear that oil and gas will play massive roles in the global economy for years to come even as alternative energy gains steam. All of this should boost Halliburton. 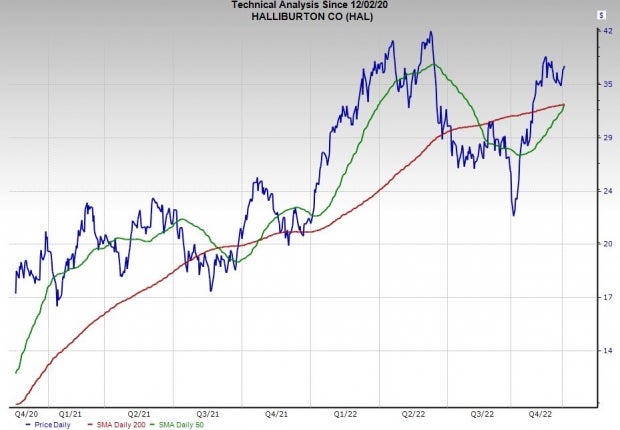 Halliburton’s adjusted Q3 earnings more than doubled YoY to beat Zacks estimates. CEO Jeff Miller believes “structural demand for more oil and gas supply will provide strong tailwinds” for the firm. Zacks estimates call for its revenue to surge 33% in 2022 to boost its adjusted earnings by 94%.

HAL is expected to follow this up with 17% stronger sales in 2023 and another 41% higher earnings. Haliburton’s outlook showcases growth and stability, with many of its peers in the oil and energy sector set to post YoY declines in 2023.

Halliburton’s upward earnings revisions help it land a Zacks Rank #1 (Strong Buy) right now. Plus, its industry ranks in the top 12% of over 250 Zacks industries, and its dividend yields 1.3%. Halliburton stock has soared 65% in 2022, which includes a huge fall and nearly as large of a comeback.

Halliburton’s average Zacks price target offers 20% upside to Friday’s levels. HAL trades at a 25% discount to its industry at 13.2X forward earnings. This also marks a 20% discount to its own five-year median. Plus, 11 of the 14 brokerage recommendations Zacks has are “Strong Buys,” alongside two “Buys,” and one “Hold.”

Most recently, VICI announced on December 1 its plans to buy the remaining 49.9% interest in the MGM Grand Las Vegas and Mandalay Bay joint venture from Blackstone to bring both under VICI’s complete control.

The deal is projected to close in the first quarter of 2023 and comes after VICI completed its $17 billion deal to buy MGM Growth Properties in April 2022. VICI is now a true giant of casinos, resorts, and conventions. 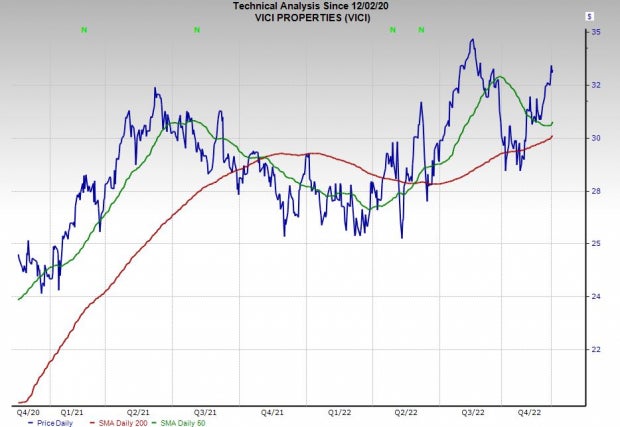 Meanwhile, its adjusted FFOs are projected to pop 5% this year and 8% in 2023. These projections don’t include the recently announced deal with Blackstone.

VICI shares have climbed 60% in the last three years to blow away its industry and outclimb the S&P 500. VICI is up 13% in 2022 and it still trades below its average Zacks price target.

The stock trades not too far above its three-year median at 16.4X forward 12-month earnings and at a 30% discount compared to its industry. Its valuation levels are right in line with its industry despite its outperformance. And VICI surged above its 50-day moving average recently.

W.R. Berkley is an insurance holding company that’s one of the larger commercial lines writers in the U.S. W.R. Berkley became a Fortune 500 firm back in 2004 and joined the S&P 500 in 2019.

WRB’s core focus is insurance for businesses and high-value homes, vehicles, and collectibles. W.R. Berkley boasts that it’s able to offer tailored solutions for an array of clients ranging from architects and engineers to life sciences firms and tech companies, as well as bars, restaurants, and almost anything else you might imagine.

Zacks estimates call for W.R. Berkley’s revenue to climb 15% in 2022 and another 10% in 2023, driven by rising rates and a thriving business model.

W.R. Berkley’s adjusted earnings are projected to climb 26% and 10.5%, respectively during this same stretch. The insurer’s higher premiums are showing up in its improved FY22 and FY23 earnings outlook, which helps it grab a Zacks Rank #1 (Strong Buy). 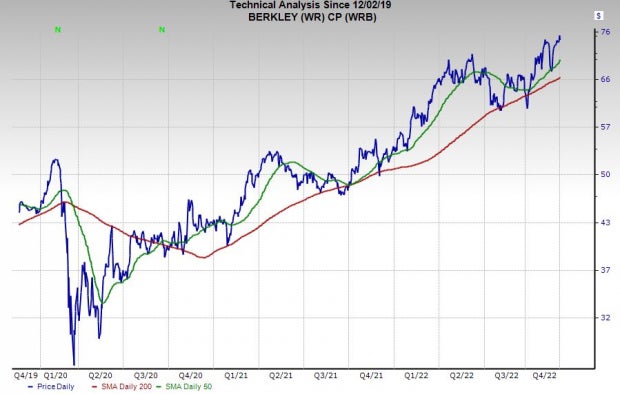 W.R. Berkley’s balance sheet is solid and it has a proven history of generating consistently strong profits. W.R. Berkley also pays a dividend and buys back its own shares.

Should Investors Consider These 3 Low-Beta Stocks?