Catalent, Inc. (CTLT - Free Report) completed the expansion of its clinical supply facility in the Waigaoqiao Free Trade Zone (FTZ) in Shanghai, China. The project, which has significantly expanded the site area, enabled the installation of additional refrigerated (between 2 and 8 degrees Celsius) and deep-frozen (between minus 70 and minus 90 degrees Celsius) storage and secondary packaging capabilities to be expanded.

Catalent’s senior management team was expected to showcase the facilities at the site and host workshops on clinical supply management and new GMP policies at two recently-concluded customer events, marking the completion of the expansion.

The latest expansion of the clinical supply facility is expected to solidify Catalent’s foothold in the growing clinical trials space in the Asia-Pacific region.

Significance of the Latest Expansion

The Waigaoqiao facility is one of two clinical supply facilities that Catalent operates in Shanghai (the other being in Tangzhen, outside the FTZ). The facilities, in unison, provide sponsors with optimized supply solutions for studies undertaken in China and the Asia-Pacific region and globally through Catalent’s extensive network. These include clinical supply management and clinical returns and destruction, among others.

Per management, since China is the fastest-growing clinical trials market in the Asia-Pacific region, Catalent continues to invest and expand its facilities and services to offer reliable, flexible and integrated customer support. These additional capabilities are expected to increase the site’s ability to support clinical trials for advanced therapeutics, which often demand specialized storage and handling capabilities.

Per a report by MarketsandMarkets, the global clinical trial supplies market is anticipated to reach $5.7 billion by 20276 from $3.6 billion in 2022 at a CAGR of 9.7%. Factors like rising research and development expenditure in pharmaceutical and biopharmaceutical companies and the increasing number of clinical trials worldwide are likely to drive the market.

Given the market potential, the latest site expansion will likely provide a significant impetus to Catalent in the clinical trials space in the Asia-Pacific region.

In November, Catalent announced its first-quarter fiscal 2023 results, where it saw year-over-year improvement in the Pharma and Consumer Health segment. Catalent had undertaken some facility expansion activities during the reported quarter besides inking some strategic deals in the past few months. These developments raised our optimism about the stock. 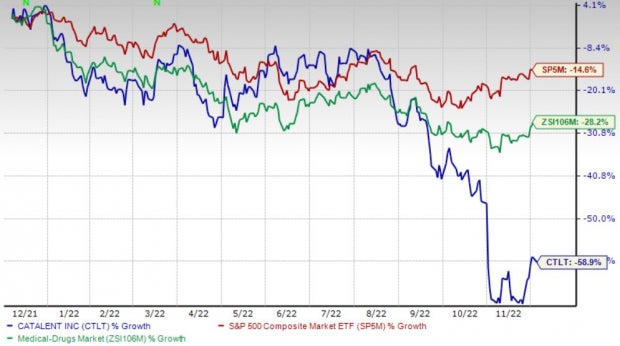 AMN Healthcare, carrying a Zacks Rank #2 (Buy) at present, has an estimated long-term growth rate of 3.3%. AMN’s earnings surpassed the Zacks Consensus Estimate in all the trailing four quarters, the average beat being 10.9%.

AMN Healthcare has gained 7% against the industry’s 28.4% decline in the past year.

ShockWave Medical, carrying a Zacks Rank #2 at present, has an estimated growth rate of 21.2% for 2023. SWAV’s earnings surpassed estimates in all the trailing four quarters, the average beat being 146.1%.

ShockWave Medical has gained 28.3% against the industry’s 23.1% decline over the past year.

McKesson, carrying a Zacks Rank #2 at present, has an estimated long-term growth rate of 10.1%. MCK’s earnings surpassed estimates in two of the trailing four quarters and missed the same in the other two, the average beat being 4.8%.

McKesson has gained 70.3% against the industry’s 7.8% decline over the past year.