Today’s episode of Full Court Finance at Zacks dives into some of the mixed signals that the stock market and economy are sending. Despite the volatility and slowing growth, long-term investors might consider buying stocks in December for 2023, even if that means starting tiny positions or dollar-cost averaging into blue chips. The two stocks we explore today are Intuit (INTU - Free Report) and Mastercard (MA - Free Report) .

Stocks climbed on Thursday to snap the S&P 500's five-session losing streak. The benchmark will have to do more if it wants to climb back above its 200-daying moving average once again. Still, it was a positive sign to see buyers step up after the recent string of selling.

Wall Street is finding it very difficult to gauge what’s next and seemingly overreacts in both directions following good and bad news when it comes to rate hikes. The Fed’s rapid and large rake hike efforts have certainly cooled overheated areas of the economy such as housing and technology, with more job cuts popping up in other areas.

Consumer spending is also slowing, with even higher-income Americans turning a bit more frugal. A downturn is showing up in S&P 500 earnings estimate revisions for 2023, though they are yet to signal the massive recession that some on Wall Street have warned about. 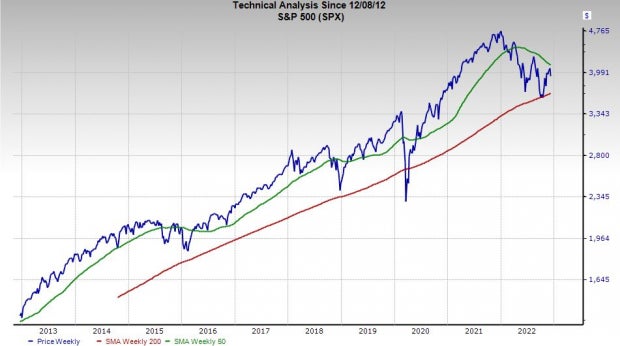 There are plenty of other seemingly divergent signals about the health of consumers and the economy. And the Fed’s FOMC meeting and the November CPI report will likely prove pivotal in the near term. Thankfully, long-term investors can utilize periods of uncertainty and nerves as a chance to start positions in strong blue chip stocks.

The first stock up today is Intuit Inc. (INTU - Free Report) , which topped our first quarter FY23 estimates at the end of November. Intuit reiterated its 2023 operating income and earnings per share guidance, as its diversified offerings from tax help software to email marketing remain highly valuable to its customers.

Intuit’s growth outlook for FY23 and FY24 highlight strength and resilience. Even with its strong outlook and expanded portfolio, INTU shares have been crushed and recalibrated to reflect a new interest rate environment. Inuit now trades at potentially attractive long-term entry points, and Wall Street remains very high on INTU. 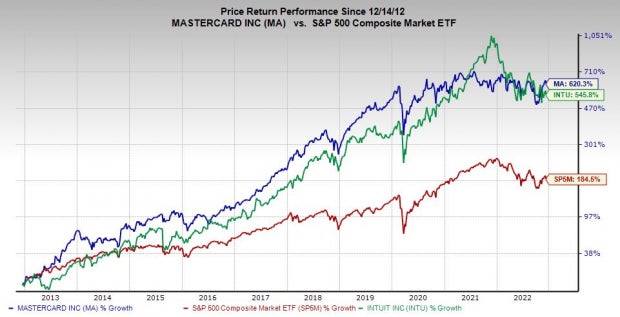 Mastercard (MA - Free Report) is a consumer and business credit card powerhouse that operates an elaborate backend processing network. Some might be worried that upstart fintech firms are set to eat Mastercard’s lunch, but MA’s growth outlook and its relative strength in 2022 point to the opposite.

Mastercard topped Q3 estimates at the end of October and highlighted solid consumer spending in many segments, including travel. The company has also made sure it is making bets on future growth areas of the wider digital finance world. Mastercard, like Intuit, boasts an impressive outlook for both earnings and revenue expansion. And on December 6 it announced that it boosted its dividend and its share buyback program.

Time to Buy These Iconic Stocks for 2023?