June 23, 2016 will be long-remembered in the European financial history as Britain parted ways with the European Union (EU) by a referendum. With the consequences of this event expected to be mostly negative on the British economy, going by several analysts’ views, Britain’s currency pound fell prey to the event along with several other risky assets.

The currency fell to a 31-year low due to Brexit, forcing the pound ETF CurrencyShares British Pound Sterling ETF (FXB - Free Report) to shed 8.4% on June 24, 2016. The fund hit an all-time low on the day and is on its way southward, having lost about 2.6% in the pre-market session of June 27, 2016.

Chances of U.K. slipping into a recession are higher ahead due to weaker terms of trade and a likely flight of investments on uncertain economic policies. The likes of Goldman Sachs has forecast that the U.K. economy will likely see a "mild recession" by early 2017. Investors should note that the possibility of a slowdown in the economy may lead Bank of England to cut interest rates, leaving no scope for pound outperformance or stabilization in the near term.

Definitely, the pound ETF is not a Buy at the current level. But investors having a strong stomach for risk may tap it with a long-term view. After all, all the downside movement in the fund will be capped in fast, in fact over the next few sessions, as investors are hurrying to price in the looming risk in pound. With this, the currency and the related fund may bottom out soon and give way to a reversal. 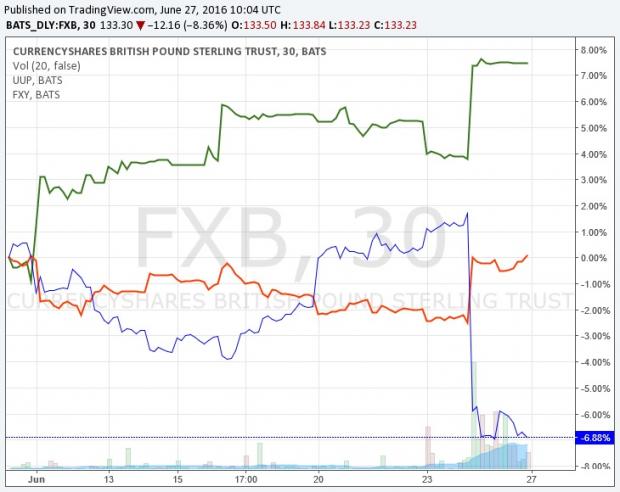 We had issued the following article way back in 2013 based on then relevant facts and figures:

It has been a rather forgetful year for the British pound so far as the currency lost close to 6.5% versus the U.S dollar since the start of January. This makes it one of the worst performing currencies on a year to date basis after the Japanese yen (read DXJ--Best ETF to Play the Japan Rally).

The economy suffered a credit rating downgrade of one notch by rating agency Moody’s in mid February this year. Also, recessionary concerns have been plaguing the economy for a long time.

All these factors coupled with the escalation of the European woes from the first half of this fiscal year have primarily been responsible for the dismal performance of the currency versus the U.S. dollar (see Time to Buy the Australian Dollar ETF?).

However, the vicious sell off in the currency has made the currency inexpensive decent value proposition at this time. This is especially true when considering the current level which is at multi year lows. Therefore, for investors seeking exposure to the Great Britain Pound (GBP) relative to the USD, this provides an excellent entry point for investors.

Of course an easy way of doing this is to buy the CurrencyShares British Pound Sterling ETF (FXB - Free Report) , which tracks the performance of GBP versus the USD. Also, a chart analysis of the ETF signifies that FXB might have finally found a bottom after the sharp downtrend.

As we can see from the chart above, the ETF has been in a very steep downtrend from the beginning of this year. FXB lost around 6.56% in the first quarter of fiscal year 2013. However, the encouraging part out here is that the ETF has been showing some sort of a consolidation of late with higher-than-usual volumes (see Time to Sell the Steel ETF?).

Also, FXB has very recently broken out above its three month long downtrend as indicated by the green encircled portion in the chart above. Still, it shouldn’t be taken for a trend reversal sign yet as there is no other concrete evidence of a reversal — even on the fundamental side.

However, one could imagine that after such a vicious sell-off the ETF could witness consolidation for a while. Also, it is prudent to consider that some sort of strength is likely for the ETF as the downturn can be considered a bit overdone.

From a technical perspective, this is evident from a Relative Strength Index and the Williams R data, both of which point towards the oversold territory (read Has the Euro ETF Bottomed Out?).

Additionally, with all that being said it must be considered that the GBP is relatively inexpensive at this point. Given this, a further downturn is highly unlikely, on the contrary, a modest recovery in the GBP is certainly on the cards.

This makes a perfect case for a good entry point in the ETF at the current level as it provides a relatively higher level of safety for investors. Just note that FXB is currently trading with a Zacks ETF Rank of 3 or ‘Hold’ so it is by no means a sure thing, although technicals do point to an end to the bearishness, at least in the short term (see more in the Zacks ETF Rank Guide).