What Took Away Sheen from Tiffany's Holiday Season Sales?

Tiffany & Co. TIF has lost its sheen in the index and declined roughly 2.5% yesterday, following a lackluster performance this holiday season. Management stated that sluggish consumer spending and lowered sales at Fifth Avenue Flagship Store on account of its proximity to the Trump Tower hurt its sales. Further, the company pointed that though macroeconomic headwinds will prevail in 2017, it will counter the same through strategic initiatives and cost containment efforts.

The jewelry retailer posted lower-than-expected sales results for the November-December holiday period. Net sales came in at $966 million, marginally up from $961 million reported in the prior-year period. Tiffany informed that sales growth witnessed in Asia-Pacific and Japan were offset by decline in sales in the Americas and Europe. Comparable-store sales (comps) decreased 2%. In constant currencies, net sales rose 1%, while comps fell 1%.

Sales in the Americas fell 4% to $483 million, while comps also declined by an equivalent rate. Lower spending by local customers and a 14% sales decline at flagship store on account of fall in traffic dampened the company’s holiday season.

Sales in the Asia-Pacific region rose 7% to $200 million, while comps fell 4%. The company registered sturdy retail sales in China and in wholesale sales in Korea.

Sales in Japan jumped 16% to $143 million and comps rose by 21%, driven by increased spending by local customers.

Sales in Europe came in at $119 million, down 10%, while comps decreased 11%. Sluggish demand hurt the company’s sales results. However, sales improved in the United Kingdom in local-currency.

Other sales came in at $20 million, up 33% but comps declined 7%. The company stated that higher wholesale sales of diamonds, was offset by decline in retail sales in the United Arab Emirates.

Management anticipates earnings per share for fiscal 2016 to decline by “no more than a mid-single-digit percentage” from the prior year. Further, Tiffany reaffirmed that worldwide net sales is expected to decrease by a low-single-digit percentage. The company now envisions gross retail square footage growth of 3% through 11 openings, five relocations and six closings.

Tiffany had earlier informed that its Fifth Avenue Flagship Store, which is near to the Trump Tower, may witness lower footfall due to tight security measures and post-election disruptions there, and could affect sales in the holiday season.

Despite this, we still believe Tiffany’s omni-channel platform, store expansion programs, tapping of new markets and venturing into new revenue generating avenues is likely to help improve performance. The company's shares have advanced 30.1% in the past six months and has comfortably outperformed the Zacks categorized Retail-Jewelry Stores industry, which witnessed an increase of 10.8%. Tiffany currently carries a Zacks Rank #2 (Buy). You can see the complete list of today’s Zacks #1 Rank (Strong Buy) stocks here. 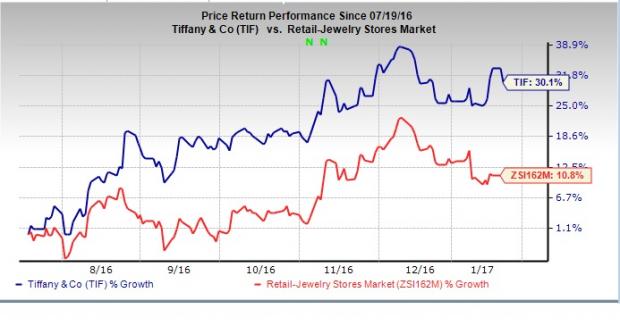