Revenues of $3.04 billion outpaced the Zacks Consensus Estimate of $2.86 billion and improved 9% year over year owing to a 5% increase in overall volumes. The company saw growth in volumes across most key segments.

Merchandise revenues grew 6% year over year to $1,895 million in the quarter owing to 4% rise in volumes. This was largely due to increase of 15% and 8% in revenues in the Automotive and Agricultural and Food Products segments, respectively.

Coal revenues surged 23% year over year to $551 million due to an 8% improvement in volumes.

The company is committed to its “CSX of Tomorrow Strategy” and strives to boost growth in Merchandise and Intermodal segments. It expects to achieve operating ratio in mid-60s range over the long term.

We note that the company’s stock has underperformed the broader Zacks categorized Transportation-Rail industry over the past three months. Shares of the company appreciated 22.59%, while the industry gained 9.38% over the same period. 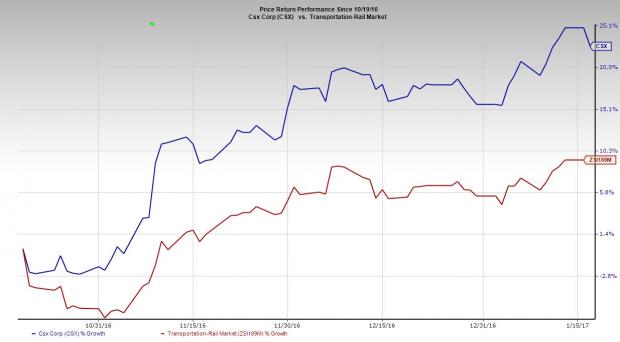