Stocks have seen an impressive rally since Trump’s win on hopes of fiscal reflation and upbeat U.S. economic data points. The S&P 500-based ETF SPY has added 6%, the Dow Jones Industrial Average-based fund DIA has advanced over 8% while Nasdaq-100 based QQQ hastacked on 5.2% gains (as of January 17, 2017) since Trump’s win.

More Gains or Correction Ahead for the S&P 500?

After gaining such heights within such a short span, momentum loss or profit booking is quite expected at the current level. This is especially true given lack of clarity regarding the fiscal policy boost in Trump’s first press conference and concerns over a protectionist government (read: Trump's First Press Conference Puts These ETFs in Focus).

The market soon went volatile with SPY losing about 0.1% and Dow Jones Industrial Average-based DIA shedding over 0.3% in the last five trading sessions (as of January 17, 2017). As soon as market uncertainty started rearing its head and the dollar fell (read: January Chills Warm Gold ETFs: How Long Will the Shine Last?)

But this does not mean a ‘Trump Slump’ could derail the S&P 500 for long. The key reason for this is that we are at present transitioning from an interest-rate driven market into an earnings-driven one.

Gone are the days when the Fed’s ultra-easy money policy acted as the key driver of the market rally. The Fed is now tightening its policies while the market is hoping for fiscal expansion and the earnings recession has ended last quarter after five successive quarters of declines. Oil prices are showing signs of a recovery on the OPEC output cut deal, though continued uptrend is less likely on rising U.S. shale oil production.

How Much Upside is in Store?

Goldman believes that Trump’s proposal to cut tax rates from 35% to 15% will surely give a boost to corporate earnings but the federal deficit may inflate by 60% to reach $1 trillion in 2017. Chances of such a burgeoning deficit may decline on some promised fiscal expansion.

BMO Capital expects a year-end target of 2,350. Deutsche Bank expects the same. BMO Capital went on to explain that though many are expecting a correction ahead, no one sees a prolonged bear market. Instead, BMO Capital said that any retreat could open up further buying opportunities. Further, Barclays and J.P. Morgan sees it at 2,400 while Citi and Jeffries expect 2,325. The highest projections are offered by RBC (at 2,500) and Prudential (at 2,575).

However, investors should also note that being a large-cap index, a rising greenback in Trump’s expansionary policies will act negatively for large-cap stocks. These stocks have considerable foreign currency exposure.

So, investors are likely to realize decent gains in the near term. Investors should also note that SPY is yet to enter the overvalued territory with a relative strength index of 57.83, indicating there is more room to run. Gutsy investors can also play the index via leveraged S&P 500 ETF ProShares Ultra S&P500 SSO. 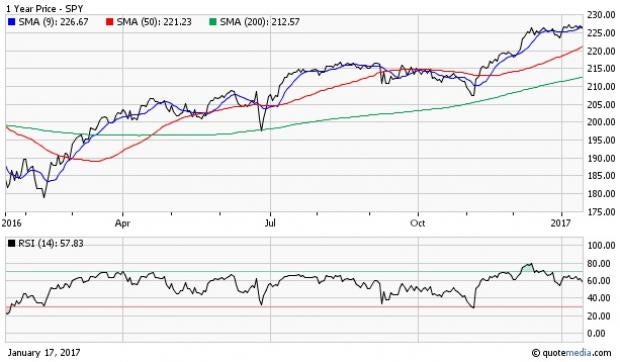