Revenues (adjusted for Windows 10 deferrals) of $26.07 billion increased 16.7% sequentially and inched up 2.2% from the year-ago quarter (up 4% in constant currency or CC). Further, it exceeded the Zacks Consensus Estimate of $21.54 billion.

Encouragingly, annuity-based revenue continued to grow indicating that the user base continues to migrate to the cloud. We note that strong cloud growth has helped Microsoft to outperform the Zacks Computer Software industry in the last six-months. While the company has gained 14.8%, the industry has returned 8.2% over the same period. 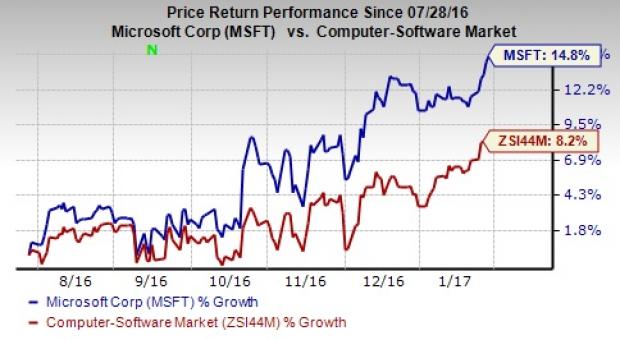 Productivity & Business Processes includes the Office and Dynamics CRM businesses. Revenues increased 10.9% sequentially and 10.3% (up 12% CC) on a year-over-year basis to $7.38 billion.

During the quarter, the company launched Microsoft Teams, a new chat-based workspace for Office 365. The company also noted that the integration of SharePoint with PowerApps and Microsoft Flow has improved adoption as evident from the fact that almost half a million people are now using these apps (PowerApps or Microsoft Flow) after just eight weeks of availability.

Based on the improving features and capabilities of Office 365, the company is winning customers like Willis Towers Watson, TD Bank, AXA, Partners Healthcare, University of Pittsburgh Medical Center and AstraZeneca AZN across the financial services and healthcare markets.

The Consumer business revenue grew 22% (21% CC) year over year in the quarter. Office 365 consumer subscriptions are now at 24.9 million, up from 24 million in the previous quarter.

Intelligent Cloud includes server, and enterprise products and services. The segment reported revenues of $6.86 billion, which was up 7.5% sequentially and 8.2% (up 10% in CC) year over year.

Server product and cloud services revenue went up 12% year over year (up 14% CC). Annuity revenue grew double digits. The high point was Azure revenue, which soared 95% at CC year over year, with Azure compute usage doubling in the reported quarter.

We believe that Microsoft’s strategy of expanding its offerings to the open source community will further drive cloud adoption. During the quarter, the company joined the Linux Foundation and announced a new Azure partnership with Open AI.

Enterprise Service revenue decreased 4% (down 2% CC) in the reported quarter.

Management stated that enterprise and education deployments increased 52% in the quarter as Windows 10 was selected by the likes of Accenture, Broward County School District and United Healthcare Group.

Microsoft expects strong Windows 10 adoption to continue based on partnerships with Dell, HP, Lenovo and Acer. The company’s collaboration with chip-makers Intel (INTC - Free Report) and Qualcomm QCOM to develop next-generation Window-based PCs is expected to further drive growth in the long run.

Gaming revenue dipped 1% in CC. Xbox Live monthly active users were up 17% to 55 million. The company witnessed more than 26 billion hours of gameplay on Windows 10 PCs and tablets.

Surface revenue decreased 2.3% from the year-ago quarter but surged 42.7% sequentially to $1.32 billion.

Operating expenses (excluding Impairment, integration, and restructuring costs) of $8.01 billion were up 8.5% sequentially and 1.4% from the year-ago quarter. However, as percentage of revenues, operating expenses decreased 280 bps sequentially but increased 10 bps on a year-over-year basis.

As a result, operating margin expanded 10 bps sequentially and 30 bps on a year-over-year basis to 25.6%.

Microsoft returned $6.5 billion to shareholders in the form of share repurchases and dividends in the reported quarter.

Microsoft completed the acquisition of LinkedIn on Dec 8, 2016. Financial results from the acquired business are reported in the Productivity and Business Processes segment. LinkedIn contributed revenues of $228 million in the quarter but hurt EPS by a penny.

The company completed the sale of its feature phone business in Nov, 2016.

Management expects foreign exchange to remain a headwind for the rest of 2017. The company now expects currency to impact revenues by 1% in the third-quarter and 2% in the fourth quarter.

Microsoft expects commercial cloud services to continue to drive annuity growth, on the back of expanding installed base, growing consumption and higher number of renewals. Management forecasts commercial unearned revenue of $20.2 to $20.4 billion, in line with historical seasonality.

LinkedIn is expected to contribute revenues of almost $950 million in the quarter.

Management said that fiscal 2017 operating expenses would be $33.1–$33.3 billion (up from $31.1–$31.4 billion) as investments in strategic growth opportunities continue.