Revenues improved 2.5% year over year to $2.08 billion and surpassed the Zacks Consensus Estimate of $2.01 billion. The year-over-year rise in the top line was due to growth in comparable store sales and a Worldpac branch opening, partly offset by store closures and Carquest store consolidations. Comparable store sales grew 3.1% in the reported quarter as against a decline of 2.5% recorded a year ago.

Gross profit declined to $907.6 million or 43.6% of sales in the reported quarter from $909.2 million or 44.7%, recorded a year ago. The decrease in gross profit margin can be attributed to supply chain expenses and headwinds related to inventory level reductions.

Adjusted selling, general and administrative (SG&A) expenses totaled $781.9 million or 37.5% of sales in the quarter under review, compared with $751.6 million or 37% in the fourth quarter of fiscal 2015. The rise in SG&A was due to continued investments in customer service initiatives.

Comparable operating income rose 5.4% to $106.1 million from $100.7 million in the prior-year quarter. Adjusted operating margin was 6% as against the 7.7% figure recorded a year ago.

Capital expenditure for the year is projected to be roughly $250 million.

Advance Auto Parts has underperformed the Zacks categorized Retail/Wholesale-Auto Parts industry over the past three months. The company’s shares have lost 3.2% over this period, as against a 0.6% gain recorded by the industry. 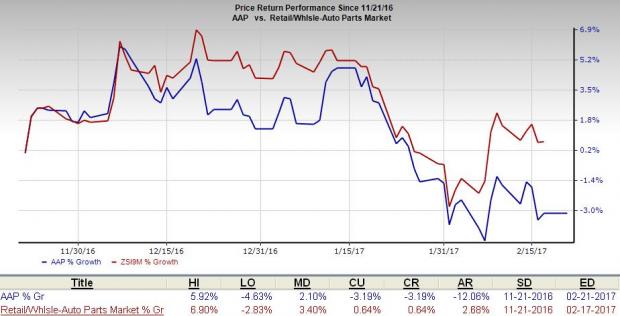 Is SCANA Corporation a Great Stock for Value Investors?