It is a favorable time for the energy market as the extended period of crude weakness is over and oil is walking on the bullish path.

Looking back, the major oil producing nations tried to capitalize on the opportunities that opened up during mid-2014, when oil was trading above $100 per barrel. These countries started to produce more and more oil as the commodity could be sold at higher prices. In fact, the last two and half years saw OPEC, Russia as well as U.S shale players vying for production share and increasing output substantially.

However, matters took a turn for the worse when a supply glut resulted in crude prices hitting rock bottom. Last February, prices nosedived to a low of $26 per barrel, thanks to the boom in shale oil production and rising output from OPEC. The downturn prompted several analysts to make projections about a potential bottom. While some suggested prices might drop to as low as $20 a barrel, other came up with estimates of as low as $10 per barrel.

However, the historic production cut agreement by OPEC and non-OPEC producers and decreasing investments (in existing and new wells) have seen oil prices more than double from Feb 2016 lows to above $50 per barrel level.

What Lies Ahead for Integrated Energy Firms?

The upstream businesses of integrated energy companies are enjoying a dream run after a prolonged period of downturn. It is high time for oil majors to lower their huge debt burden by generating earnings out of core business. So far, the companies sold their income generating assets and opted for innumerable job cuts to survive the tough operating environment.

However, the upstream players are now gathering to the oil patches, as evident from more and more drilling rigs on U.S. plays. Increase in exploration and production activities will raise the need for new storage and transporting assets. Hence, the midstream business for integrated companies might also improve.

Among the major integrated firms, Exxon Mobil Corporation (XOM - Free Report) and Chevron Corporation (CVX - Free Report) deserve particular mention. With their massive market capitalization of $339.7 billion and $210.9 billion, respectively, these companies dominate and define the Oil & Gas-International Integrated industry. The broader ‘Oil and Energy’ sector, which includes the industry, is also positively placed at 3 out of the total 16 sectors we cover (top 19%).

We have employed a few parameters for an in-depth analysis of Exxon Mobil and Chevron. Let’s analyze the factors.

Irving, TX-based Exxon Mobil posted strong fourth-quarter 2016 results. The company reported earnings of 90 cents per share, which beat the Zacks Consensus Estimate of 72 cents. The bottom line also came in ahead of 67 cents per share reported in the year-ago quarter. Increased realizations for liquids primarily drove the outperformance.

On the contrary, San Ramon, CA-based Chevron reported earnings per share of 22 cents, much lower than the Zacks Consensus Estimate of 64 cents, primarily due to lower refining margins.

Most importantly, Exxon Mobil’s solid fourth-quarter numbers, which more than offset smaller rival Chevron’s performance, led the Energy sector to turn positive in the quarter. The sector recorded earnings growth for the first time after eight quarters of declines.

The liquidity of a company is determined through current ratio that can measure the capability of a company to pay both short- and long-term obligations. The ratio measures a company’s current asset relative to current liabilities and hence it is always better for a company to have ratio of more than 1.

Chevron’s current ratio of 1.17 is not only better than 0.86 for Exxon Mobil but is also higher than energy giant BP plc’s (BP - Free Report) liquidity ratio of 1.16 and as good as leading integrated firm Royal Dutch Shell plc . 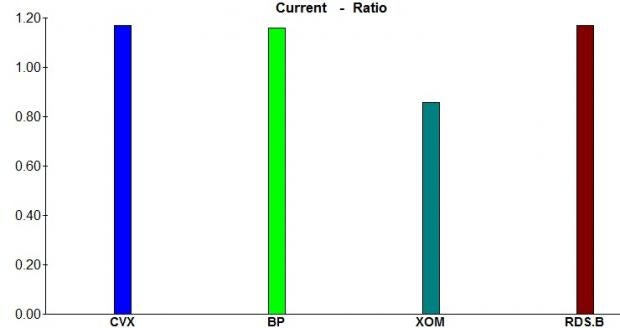 Over the prior one year Exxon Mobil has underperformed the Zacks categorized Oil & Gas-International Integrated industry. During the aforesaid period, the company fell 0.6% compared with 12.6% improvement for the broader industry.

Chevron however outperformed the industry and returned 25.8% during the same time span.

During 2016, Exxon Mobil invested $19.3 billion while Chevron spent $22.4 billion. Our research shows that the average one year trailing 12-month ROC for Exxon Mobil stands at 5.2%, much higher than 0.7% for Chevron.

Compared with the S&P 500, the Oil & Gas-International Integrated industry is undervalued. This implies that the industry has the potential to gain in the near future. The industry has an average one year trailing 12-month EV/EBITDA ratio – one of the best multiples for valuing oil and gas companies because these energy firms have a large amount of debt and EV (Enterprise Value) includes the parameter – of 8.20, which is below the S&P 500 average of 9.67. Hence, it might be a good idea not to stay away from stocks belonging to this industry.

Our comparative analysis shows that while Exxon Mobil has an edge on Chevron in certain aspects, other parameters tilt the scales in favor of Chevron. Hence, we prefer to remain on the sidelines and ask investors to hold the stocks for now as reflected in the current Zacks Rank #3 (Hold). This implies that the stocks will perform in line with the broader U.S. equity market over the next one to three months.

Today you can gain access to long-term trades with double and triple-digit profit potential rarely available to the public. Starting now, you can look inside our stocks under $10, home run and value stock portfolios, plus more. Want a peek at this private information? Click here >>

Endo (ENDP) to Post Q4 Earnings: Will the Stock Disappoint?