PayPal Holdings, Inc. (PYPL - Free Report) has been sued for misleading donors about their charitable donations. In a class action lawsuit filed on Feb 28 in a Chicago court, the company has been accused for not distributing funds to charities as intended by donors.

Lead Plaintiff Terry Kass claims that only $100 of her $3250 December donations was distributed among three charities of her selection. The company withheld the rest without notifying her or the intended charities.

Kass added that she was repeatedly told that all her donations went to her chosen charities, but it was only after insisting that the information was false, did a PayPal employee inform her that the charities were not receiving the fund as they were not registered with the company's business account.

The Procedure in Question

A charity to receive donations need to have two separate accounts – a business account and another account with PayPal Charitable Giving Fund. Otherwise donations are not directed even if they are listed on PayPal Giving website.

But the question is – why would PayPal accept donations on behalf of those charitable accounts that do not fulfill the company’s two account criteria? And where is the money actually going if not delivered to where they should be?

The lawsuit has alleged that PayPal does not inform a donor or a charity if they fail to fulfill requisite conditions, take the money in its control and donate it to organizations of its desire without bothering about the donor’s intentions or expectations.

As an initial response, a PayPal representative said, "PayPal and PayPal Giving Fund have a long history of fostering significant social impact by connecting donors and charities. We work to ensure as many charities as possible can benefit from our global donation campaigns.”

"We are disappointed by the lawsuit and we are fully prepared to defend ourselves vigorously in this matter,” the spokesman added.

PayPal has been embroiled in similar legal cases before. Apart from being a drain on resources, these instances have earned the organisation a bad name. Investors are naturally expected to remain wary.

A few months Back PayPal had announced that its donation platform surpassed $7 billion in transactions in 2016. Over the last one year, the stock has outperformed the Zacks Internet  Software industry. It has returned 9.5% compared with the industry’s return of 8.2%. 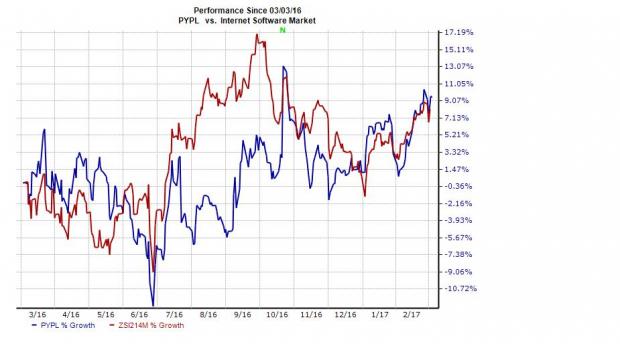 For the current year, while estimates for Applied Materials went up 8.7% for Advanced Energy it went up 18.2% however, for Texas Instruments the same remained unchanged, in the past 30 days.

How would you like to see our best recommendations to help you find today’s most promising long-term stocks? Starting now, you can look inside our portfolios featuring stocks under $10, income stocks, value investments and more. These picks, which have double and triple-digit profit potential, are rarely available to the public. But you can see them now. Click here >>

Is Carter Stock a Good Pick for Value Investors Now?