The steel industry is coming back to life after being out of favor for long. The industry – which had long been buffeted by depressed steel prices, a glut of cheap imports and sluggish demand growth – has staged a recovery of late, thanks to favorable developments on steel trade cases in the recent past and President Trump’s infrastructure spending promises.

President Trump, in his first address to a joint session of Congress last week, reiterated his plans to pump $1 trillion of new infrastructure spending into the U.S. economy. The president said that he will ask the Congress to pass a bill that would produce a $1 trillion investment in the national infrastructure to rebuild roads, bridges and other public infrastructure, and create millions of new jobs.

The president’s call for the massive infrastructure spending is a welcome news for steel makers as it is likely to have a beneficial effect on the industry given the expected increase in steel demand as steel is a key component in many infrastructure products. Moreover, Trump’s aggressive trade policies are expected to provide more protection to the U.S. steel industry. Trump, during his presidential campaign, repeatedly threatened to impose a 45% tariff on Chinese imports into the U.S.

Steel stocks, which had been in the dumps for most part of 2016, got a big boost following Trump’s election win in November. Expectations of increased infrastructure-related spending in the U.S. has pushed steel stocks to new highs.

Trump’s “big” spending plans have painted a bullish picture for steel companies and provided a major thrust to steel stocks. But will the steel industry continue to ride high should Trump fails to deliver on promises for spending?

There are a few fundamental factors that could keep the momentum going for the industry.

One of key factors that contributed to a rebound in the steel space is positive outcome in a number of trade cases that led to a decline in steel imports. Affirmative rulings in these cases have been be a positive catalyst for the U.S. steel industry. Steel imports fell around 15% year over year in 2016 on the back of punitive trade actions that led to levy of tariffs on imports.

Steel prices also rebounded during second-half 2016 on the back of these trade actions, reflected by a significant increase in hot-rolled and cold-rolled steel prices.

Another factor that has contributed to a recovery in steel prices is higher costs of steel-making inputs such as iron ore and coking coal. Iron ore prices roughly doubled in 2016, driven by healthy Chinese demand. A number of steel companies including AK Steel AKS and U.S. Steel X have been raising their steel selling prices in response to an increase in raw material costs.

Moreover, China is taking measures to reduce its excess steel supply. The world’s largest steel producer has pledged to cut its steel production capacity by around 50 million metric tons in 2017, according to a government work report. China exceeded its steel capacity cut target of 45 million metric tons last year. The country’s sustained efforts to eliminate excess capacity should provide support to steel prices in 2017.

In addition, continued momentum in the automotive space and a recovery across housing and commercial construction markets have been other key tailwinds for the steel industry.

The underlying demand trends in the housing space remain strong, supported by an improving employment levels, affordable interest/mortgage rates and a rise in income levels, which bodes well for steel demand in this key end-market. Moreover, the automotive sector continues its healthy run, backed by an improving job market, rising personal income, low fuel prices and attractive financing options, and the momentum is expected to continue this year.

While continued weakness in investment globally is hindering a stronger steel demand recovery, a better-than-expected forecast for China along with continued growth in emerging economies are expected to help the global steel industry resume a positive growth path in 2017. The World Steel Association expects global steel demand to expand 0.5% in 2017. Demand in emerging and developing economies (barring China) is expected to rise 4% this year.

The bullish Zacks Industry rank of 20 carried by the Steel-Producers industry is a testimony to the fact that steel stocks are back in favor. The favorable rank places the industry in the top 8% of the 250+ groups enlisted.

The Zacks categorized ‘Steel-Producers’ industry has also outperformed the broader market over the past year. The industry has gained around 60.2% over this period, much higher than S&P 500’s corresponding return of 18.7%. 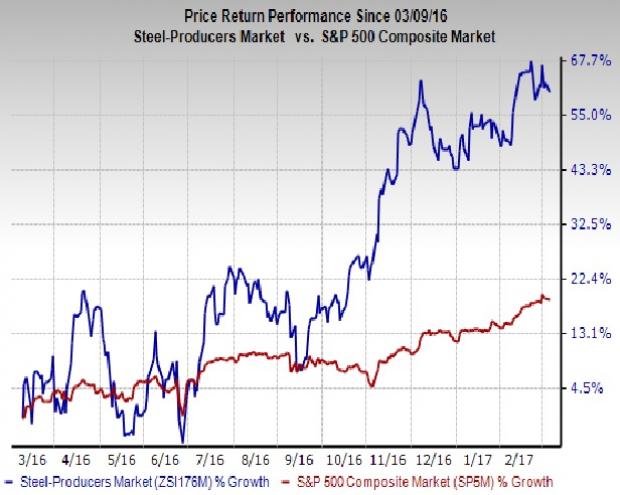 As the recovery momentum in the steel space is expected to continue this year, it would be a prudent idea to invest in steel stocks that have compelling prospects and are well poised to run higher leveraging improving steel market conditions. We highlight the following stocks, armed with a Zacks Rank #1 (Strong Buy) or 2 (Buy), which have significant operations in the U.S. and are worth considering for investment right now. You can see the complete list of today’s Zacks #1 Rank stocks here.

Pittsburgh-based U.S. Steel sports a Zacks Rank #1 and has an expected long-term earnings per share (EPS) growth rate of roughly 8%. The company delivered a positive earnings surprise of a staggering 2,600% in the last reported quarter. The stock has returned 188.6% over the past year, outperforming the Steel-Producers industry’s gain of 60.2% over the same period. The company has an expected earnings growth of 265.4% for the current year.

Based in Buenos Aires, Argentina, Ternium is another attractive choice with a Zacks Rank #1. The company has an expected long-term EPS growth rate of roughly 18.4%. It has delivered an average positive earnings surprise of 16.4% over the trailing four quarters. Earnings estimate for 2017 has also improved by 10% over the last 30 days.

Our next pick in the space is Luxembourg-based ArcelorMittal, carrying a Zacks Rank #2. The company has an expected long-term EPS growth rate of roughly 10%. It has an expected earnings growth of 56.8% for the current year. The company's earnings estimate for 2017 has improved by 15% over the last 30 days. ArcelorMittal has gained 86.1% over the last one year, outperforming the Steel-Producers industry’s gain 60.2% over the same period.

Headquartered in Sao Paulo, Brazil, Companhia Siderurgica carries a Zacks Rank #2 and has an expected earnings growth of 242.9% for 2017. Its earnings estimate for the current year has increased by a whopping 900% over the last 30 days. The stock has gained 96.2% over the last one year, outperforming the Steel-Producers industry’s gain 60.2% over the same period.