Merck’s Keytruda Label Expanded: The FDA expanded the label of Merck’s anti-PD-1 treatment Keytruda for use in adult and pediatric patients with classical Hodgkin lymphoma (cHL) refractory to treatment, or who have relapsed after three or more prior lines of treatment. Meanwhile, the agency extended the PDUFA date for Keytruda in previously treated advanced microsatellite instability-high (MSI-H) cancer. A response for this indication is now expected on Jun 9, 2017. Keytruda, one of Merck’s new products, is already approved for different types of cancer and brought in sales of $1.4 billion in 2016 (Read more: Merck's Keytruda Gets FDA Nod for Lymphoma Indication). Merck has outperformed the Zacks categorized Large Cap Pharmaceuticals industry so far in 2017 with shares gaining 9% compared to the industry gain of 7.7%.

Allergan Teams Up with Editas for Eye Disease Treatments: Allergan (AGN - Free Report) is teaming up with genome editing company Editas for the discovery and development of up to five of the latter’s genome-editing ocular programs including the lead program for Leber congenital amaurosis (LCA10), a rare, inherited retinal degenerative disease that appears in childhood and leads to blindness. The alliance will see Allergan shelling out $90 million upfront as well as milestone payments and royalties. CRISPR technology has the potential to create drugs with durable efficacy (Read more: Allergan and Editas Tie Up to Treat Eye Diseases).

Partial Clinical Hold on Karyopharm Drug: Karyopharm’s (KPTI - Free Report) lead SINE compound, selinexor, has been placed on partial clinical hold by the FDA -- while patients with stable disease or better may remain on selinexor therapy, new patients will not be enrolled until the hold is lifted.

The hold was placed due to incomplete information in the existing version of the investigator's brochure, including an incomplete list of serious adverse events associated with selinexor. Karyopharm said that it has submitted all the materials needed by the FDA to lift the hold. The company said that the hold is not due to any patient death or new safety information on selinexor.

Selinexor is currently in several mid- and late-stage studies for a wide range of cancer indications, including multiple myeloma, diffuse large B-cell lymphoma and liposarcoma.

FDA Warning about Allergan’s Viberzi: The FDA issued a warning regarding increased risk of serious pancreatitis associated with the use of Allergan’s irritable bowel drug Viberzi in patients who don’t have a gall bladder. The agency said that this could result in hospitalization or even death. The FDA said that health care professionals should not prescribe Viberzi to this patient population and should consider other treatment options. The warning could put a dent on Viberzi sales which came in at $93.3 million in 2016.

AstraZeneca’s PARP Inhibitor Scores in Phase III Study: AstraZeneca’s PARP inhibitor, Lynparza, scored in a late-stage study evaluating the drug as a maintenance monotherapy in patients with germline BRCA-mutated (gBRCA), platinum-sensitive, relapsed ovarian cancer. Lynparza tablets reduced risk of disease progression by 70% with an investigator-assessed progression-free survival (PFS) of 19.1 vs 5.5 months with placebo while a blinded independent central review showed PFS of 30.2 months vs 5.5 months with placebo. A statistically-significant improvement in time to second progression or death was also observed along with benefits in other key secondary endpoints.

Lynparza is currently approved in a capsule formulation -- approval of the tablet formulation could offer patients a reduced pill burden. Lynparza brought in sales of $218 million in 2016. Label expansion into the maintenance therapy setting would expand the patient population and boost sales further (Read more: AstraZeneca's Cancer Drug Lynparza Positive in Phase III).

AstraZeneca had some other updates as well. The company got a Complete Response Letter (CRL) from the FDA for ZS-9 for the treatment of hyperkalemia. The letter was issued following an inspection of the ZS-9 manufacturing facility with no new clinical data being asked for. Last year too, the company had got a CRL for ZS-9. AstraZeneca also announced a strategic collaboration with Circassia for respiratory disease. AstraZeneca is a Zacks Rank #3 (Hold) stock. You can see the complete list of today’s Zacks #1 Rank (Strong Buy) stocks here.

FDA Panel Votes on Endo Drug: Endo’s (ENDP - Free Report) opioid drug, Opana ER, was hit by an FDA advisory panel vote -- the panel voted that the benefits of the drug no longer outweigh the risks. There has been a lot of concern regarding the product's misuse, abuse and diversion. While the FDA is not required to do so, it usually follows the advice of its advisory panels. Given the concerns, the most likely scenario could be that Opana ER will remain on the market but with additional regulatory restrictions to lessen the risks associated with its use. Opana ER sales were $158.9 million in 2016, down 10%.

The NYSE ARCA Pharmaceutical Index gained 1.6% over the last five trading sessions with the sector reacting favorably to President Donald Trump’s selection of Dr. Scott Gottlieb for the top position at the FDA. His nomination is being viewed as a positive with expectations that the drug approval process will be streamlined under his tenure. Among major pharma stocks, AstraZeneca was up 3.3% this week while Merck was down 2.6%. Over the last six months, Johnson & Johnson (JNJ - Free Report) gained 8.6% while AstraZeneca was down 9.8% (See the last pharma stock roundup here: Mylan, Endo Report 4Q Results, FDA Nod for AZN Diabetes Drug). 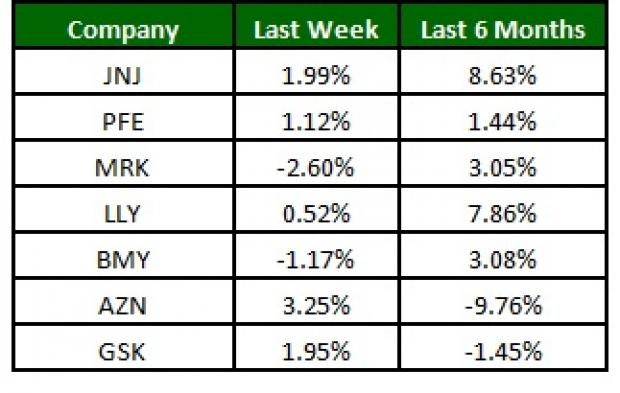 If the stocks above spark your interest, wait until you look into companies primed to make substantial gains from Washington's changing course.