Square (SQ) Debuts in UK: Is a Turnaround in the Cards?

Square, Inc. (SQ - Free Report) is making an effort to turn around its ailing fortunes. The payment processor announced its first European venture yesterday with the launch of its mobile payment services in the U.K. It became the fifth market where Square services are now available after the U.S., Australia, Canada and Japan.

Square founder and CEO Jack Dorsey who is also the CEO of Twitter (TWTR - Free Report) stated that U.K. has “always been an example of entrepreneurship and small businesses, not just in London but all over country... That’s the same pattern we saw in the U.S. We also now have hardware that’s global so it allows us to move much faster."

The move places Square in direct competition with iZettle and Ingenico Group that enjoy an early mover advantage in the U.K. Notably, Square charges a fee of 1.75% for in-person payments and 2.5% for online transactions or via phone or electronic invoice. The Square card reader is priced at £39 ($49). Meanwhile, IZettle’s card reader costs £59 while the transaction fee is 2.75%. It may go down to as low as 1% with increase in the number of transactions.

We believe this is a sensible move on Square’s part as the market has a considerably high concentration of small and medium-sized businesses and thus offers significant growth opportunities.  In the U.K. Square targets more than 2.5 million small businesses, which do not accept card payments yet.

The move also makes sense as Square is increasingly wary of the U.S. market that is nearing saturation. Also, competition is tough as the likes of PayPal (PYPL - Free Report) are encroaching on its turf.

Square Can Still Feature in Your Portfolio

Over the past six months, Square has impressed investors with its share price surging 47.8% against the Zacks Internet - Software industry’s loss of 6.4%. An impressive track record of growth backed this rise. 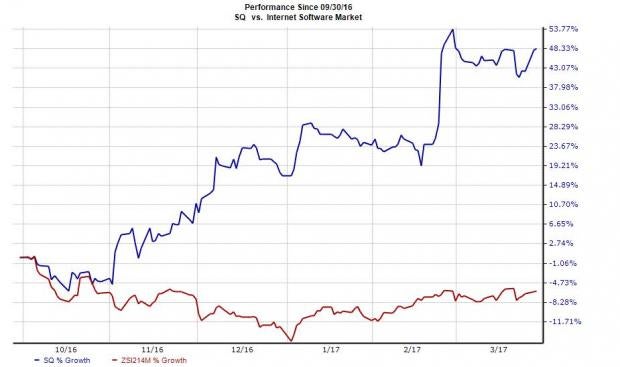 In fact, Square has been growing remarkably since it started operations eight years back. Today, it serves millions of sellers across various industries such as food, retail and services.  It processed $23.8 billion, $35.6 billion and $49.7 billion of Gross Payment Volume (GPV) in 2014, 2015 and 2016, respectively.

Gross payment volume from larger sellers represented 42% of total GPV in the fourth quarter of 2016, up from 39% in the year-ago quarter. We believe Square’s capacity to add new sellers on a consistent basis and help them grow their business to be the key to its sustained growth.

Square has finally managed to eliminate the biggest drag on its profitability by ending its deal with Starbucks (SBUX - Free Report) . The deal was signed in 2012 per which Starbucks poured $25 million in Square and became the exclusive processor of debit and credit card payments for all 7,000-plus Starbuck’s stores in the U.S. However, the partnership resulted in a big loss for Square.

The relationship ceased completely in the fourth quarter of 2016 with Square’s gross profit margin increasing over 7% year over year as an immediate effect.

Square’s products have been doing well. At the fourth quarter 2016 call, management stated that the products rolled out in 2014 contributed 25% to the adjusted revenues.

Products like Square Capital, Invoices and Instant deposit carry higher margins than core payment processing. Moreover, marketing cost is low as it is sold to merchants who are already customers of Square. Return on investment toward sales and marketing is also strong.

We believe Square is poised to grow its margins, leveraging on its comprehensive commerce ecosystem, successful products, strong return on investment and discontinuation of the Starbucks deal.

In the past 60 days, two estimates have gone higher for Square while none have moved south in the current quarter. Estimates narrowed from a loss of 10 cents a share 60 days ago to loss of 8 cents per share currently, a move of 25%.

Meanwhile, the current year estimate revision trend is also looking encouraging, with five estimates moving north in the last 60 days and none moving south. The consensus estimate trend has also seen a boost in this time frame, rising from a loss of 33 cents per share 30 days ago to a loss of 25 cents per share currently, an increase of 32%.

This has helped Square to earn a Zacks Rank #1 (Strong Buy), further highlighting the company’s solid position. You can see the complete list of today’s Zacks #1 Rank stocks here.